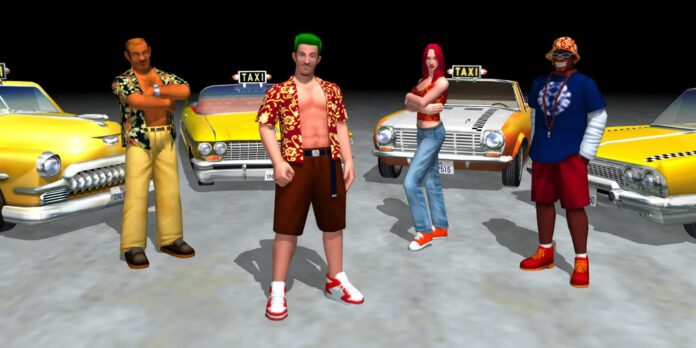 Rumor mill: Anonymous sources claim that two Sega Dreamcast classics are already in early production. Crazy Taxi and Jet Set Radio still need a couple more years to stew, but they are reportedly being remade with a “big budget.” The games might be a part of Sega’s Super Game thing, but details are still too vague to put any pieces together.

Insiders told Bloomberg that Sega has at least two retro games in active development. Both are from the Dreamcast days — Crazy Taxi and Jet Set Radio. They are the first two entries from a list of titles somehow tied (or not?) to Sega’s “Super Game” program announced last year.

These will not be simple ports to modern systems. According to the insiders, Sega is sinking big budgets into these reboots. So it sounds like developers are doing more than just slapping on a new coat of paint. They are likely rebuilding the games entirely from the ground up.

Sega reportedly started working on Crazy Taxi over a year ago. However, it isn’t due out for at least two to three more years. Jet Set Radio is in even earlier development and will likely take significantly longer. The insiders noted that cancelation is not an impossibility for either game at this point.

Other games Sega has mentioned rebooting include Panzer Dragoon, Virtua Fighter, Rez, Shinobi, and Streets of Rage. It’s too early to tell if Sega can generate enough new interest in old games by dusting off its greatest hits for a modern audience. The industry is already oversaturated with remakes, remasters, and reboots.

Information on what Sega’s Super Game exactly is is still somewhat vague. The insiders claim that the initiative is Sega’s attempt to generate “global hits” that rival Fortnite. Last November, Sega announced it had partnered with Microsoft to build the Super Game on the Azure platform. Later that month, it dispelled rumors that it was working on something that would be exclusive to Xbox.

The most recent information on the project came from Sega Executive Vice President Shuji Utsumi, who defined Super Game as “the development of AAA titles that cross over Sega’s comprehensive range of technologies, and we will aim to achieve this in our five-year plan.”

It doesn’t sound like Sega’s back catalog falls entirely into this definition. Utsumi also mentioned incorporating cloud gaming and NFTs into Sega’s vision of Super Game. Obviously, Microsoft’s Azure can help with the cloud gaming portion, but NFTs might not work out so well in Sega’s grand plan.

Gamers are not super enthusiastic about NFT gaming. It tends to be shady NFT “investors” who are more interested in making money than playing the game. The b blockchain fad still feels a bit icky for most gamers. Axie Infinity is a prime example.

First, hackers scammed the NFT-based game out of $615 million in crypto in late March. More recently, Kotaku reported that Axie “managers” are in a panic because their pyramid schemes that make them money by exploiting “scholars” are falling apart due to attrition. So NFTs might not be Sega’s best idea for this Super Game, whatever it turns out to be.