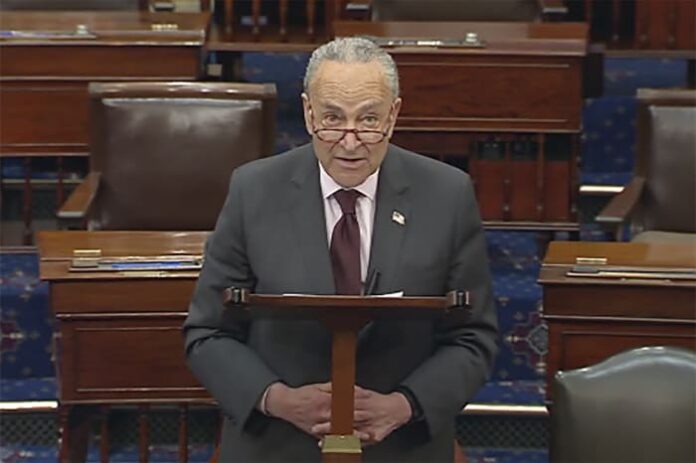 WASHINGTON – Senate Majority Leader Chuck Schumer angrily denounced as an “abomination” the Supreme Court’s leaked draft decision that would overturn the nation’s landmark Roe v. Wade ruling and vowed that if it stands the Senate will vote on legislation to uphold women’s access to abortions.

Schumer said the conservative justices “lied” to the Senate during confirmation hearings when they assured senators the case that since 1973 has allowed abortion access was settled law. He said with the draft opinion circulating, “the Supreme Court is poised to inflict the greatest restriction of rights in the past 50 years — not just on women, but on all Americans.”

“This is a dark and disturbing morning in America,” Schumer said as he opened the Senate on Tuesday.

But the Democratic leader stopped short of promising to change Senate filibuster rules to allow Democrats to overcome Republican obstruction and pass legislation that would salvage the landmark abortion law on their own, as some party advocates are demanding.

Schumer does not have the votes within the Democrats’ razor-thin 50-vote majority to muscle through a rules change in the Senate that would allow Democrats to push past what is typically a 60-vote threshold on big bills.

Instead, the Democrats shifted attention swiftly and intently on the chamber’s two most prominent Republicans who support abortion access — Sen. Susan Collins of Maine and Sen. Lisa Murkowski of Alaska. Both had refused to help Democrats stop confirmation of the Trump-era judges who tipped the Supreme Court’s majority to conservatives and are now putting the landmark Roe vs. Wade ruling at risk.

Murkowski told reporters on Capitol Hill that if the direction of the draft becomes the final opinion, “I will just tell you that it rocks my confidence in the court right now.”

Murkowski and Collins introduced legislation earlier this year to turn the court’s longstanding opinion on Roe v. Wade into law and President Joe Biden on Tuesday urged Congress to do just that.

Passing an abortion access bill through the Senate remains a political longshot, especially under the rapid timeline that would be needed before the Supreme Court issues its final decisions in June. Such legislation would most likely require the 60-vote threshold and there are not enough Republicans publicly willing to join Murkowski, Collins and the Democrats to preserve Americans’ access to abortion services.

Collins in a morning statement pointed blame back to the justices themselves, personally singling out two of the three Trump-era judges, Neil Gorsuch and Brett Kavanaugh, she had supported for confirmation.

The Maine Republican said if the leaked draft opinion on abortion becomes the ruling of the court, “it would be completely inconsistent with what Justice Gorsuch and Justice Kavanaugh said in their hearings and in our meetings in my office.”

Even though Collins told reporters Tuesday her bill with Murkowski to put Roe v. Wade into law could have broader support, so far, there are not the number of Republicans needed to boost it to passage.

As stark warnings of an end to Roe v. Wade become the potential new normal in the U.S., the political fallout in Congress is certain to be far-reaching and complicated, a gripping new phase in the partisan fights over abortion access, religious liberties and the fundamental aspects of women’s reproductive health..

The Republican senators in particular, who helped turn the court into a solid 6-3 conservative majority, face deep scrutiny over their public beliefs at the time and the reality now confronting the country.

Collins helped confirm both of those nominees, though she did not vote for Justice Amy Coney Barrett because the nomination came so close to the 2020 election, when the presidency was being decided and she also faced a stiff reelection race.

Murkowski, who is up for reelection this year, did not vote for Kavanaugh after his explosive confirmation hearings over allegations he sexually assaulted a woman acquaintance during high school. She did give her support to Gorsuch and Barrett.

Other Republican senators slammed the unusual leak of the high-profile draft opinion as an attempt to bully the court.

The Republican leader Mitch McConnell complained about “unhinged” Democratic rhetoric and said the leak should be “investigated and punished to the fullest extent of the law.” Chief Justice John Roberts, confirming the authenticity of the leaked draft opinion, on Tuesday ordered an investigation into the leak.

One pivotal Democrat, Sen. Joe Manchin of West Virginia, who talks frequently with McConnell, declined to weigh into the debate — or whether he would be willing to rethink his opposition to changing filibuster rules. He has been a holdout denying Democrats of the 51 votes needed to change the rules.

But Sen. Elizabeth Warren, D-Mass., countered McConnell and the other Republicans who want to go after the leak. “What should be investigated and prosecuted is the fact that people who were nominated to the Supreme Court stood up and said they believed in the rule of law and precedent, and then at first opportunity, changed direction by 180 degrees and are going for a full repeal of Roe,” said Warren, a former Harvard law professor.

Schumer said Republican senators will have to answer to voters in this fall’s election — signaling the Democrats prefer to fight the issue on the campaign trail than in Congress.

Schumer said “the blame for this decision falls squarely on Republican senators” who voted to confirm justices that solidified the court’s conservative majority.

Conservatives have been focused for years working behind the scenes to undo the nation’s 1973 abortion law, and Republican senators made judicial nominations their top priority during Donald Trump’s time in the White House.

Trump was able to nominate and have the Senate confirm three justices, engineering a wholesale revamping of the high court, now with a solid conservative 6-3 majority.

As GOP leader, McConnell stunned Washington at the start of the 2016 presidential campaign season when he refused to allow the Senate to consider then-president Barack Obama’s nominee, Merrick Garland, for a high court vacancy, holding the position open until Trump won election to become president that fall.

McConnell then marshalled into place a Senate rules change to enable Republicans to bypass a Democratic filibuster and approve Supreme Court nominees on a simple 51-vote threshold — going further than Democrats had done on their own earlier rules change to allow majority confirmation of lower-level posts.

Late Monday, a draft of the court’s majority decision was leaked and reported showing the majority’s intent to overturn the abortion law. It is unclear if the draft circulating will be the court’s final decision on the case, which is expected by late June.

A decision to overrule Roe would lead to abortion bans in roughly half the states. Crowds gathered overnight at the Supreme Court, which sits across the street from the U.S. Capitol and can be seen from the House and Senate.