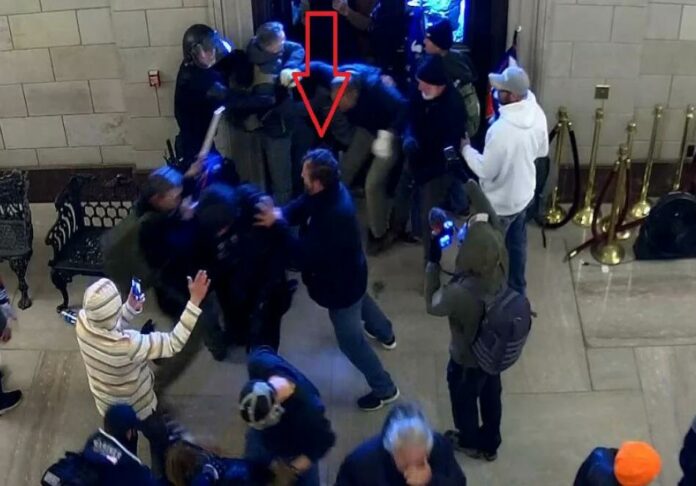 A South Carolina man who opened a key U.S. Capitol building entrance from the inside on Jan. 6, 2021, allowing dozens of rioters to pour in, was sentenced to three years in federal prison at a hearing in Washington, D.C.

George Tenney III received one of the harshest sentences yet for the Palmetto State’s 19 Capitol riot defendants, even after the 36-year-old Anderson chef and his friends and relatives wrote letters pleading for mercy from U.S. Judge Thomas Hogan.

Hogan on Dec. 5 also ordered Tenney to pay $2,000 in restitution toward the nearly $3 million in damage caused to the Capitol building during the riot.

Tenney was among the first in a mob of President Donald Trump supporters to breach the seat of the U.S. government in a botched effort to stop Congress from certifying Democrat Joe Biden as the 2020 presidential election’s rightful winner.

Once inside, the father of two verbally and physically harassed Capitol police and employees in order to open the Rotunda doors from within, allowing more rioters to enter, charging documents state.

“He was the original instigator of one of the two largest breaches of the Capitol building that day,” federal prosecutors wrote in pre-sentencing filings. “Because of Tenney, dozens of rioters entered the Capitol. Police were assaulted. Congress was threatened. Property was damaged. Democracy was put on hold.”

In a plea for leniency, Tenney apologized for his role in the attack and disavowed the beliefs that led him and thousands of other Trump supporters to the nation’s capital that day. Tenney and his lawyer blamed Trump for amplifying baseless claims that Democrats had stolen the 2020 election with strategic fraud in battleground states.

“He realizes now that he ruined his career, embarrassed his family, put his freedom in jeopardy and became a convicted felon all in service of an absurd lie,” Tenney’s lawyer wrote. “Like most of the people protesting in the Capitol on January 6, he believed in dangerous and false narratives, picked up through internet chats, podcasts and the words of high-level government officials, including the President of the United States.”

Tenney was a passionate believer of Trump’s election fraud conspiracy theory, his case files show. He helped run a right-wing Facebook page that touted dubious claims in the lead-up to Jan. 6. Social media messages obtained by federal investigators showed Tenney was aware that the Jan. 6 election protest in Washington could become violent.

“We need to talk about the trip to D.C.,” Tenney wrote to a friend nine days before the attack. “It’s starting to look like we may siege the capital (sic) building and congress if the electoral votes don’t go right. … we are forming plans for every scenario.”

“I’ve been watching these pod cast things from this guy,” Tenney wrote the next day. “He says (then-Vice President Mike) Pence is a traitor and will betray the US on the 6th.”

Tenney and his lawyer now say he has moved on from those beliefs.

“He realizes now that he and the others in the Capitol that day were merely pawns for ill-intentioned politicians and far-right media personalities,” Tenney’s lawyer wrote. “There is no part of him that ever wants to participate in any destructive behavior again.”

Friends and relatives submitted a handful of letters describing Tenney as a kindhearted and attentive father who has learned from his mistakes.

Tenney’s lawyer stressed that his client has already suffered enough — having lost his lucrative job at Sysco, a restaurant food distributor, in the aftermath of his June 2021 arrest. Tenney said no other company in his industry will employ him now that his July guilty plea has made him a convicted felon.

He choked up in a Washington courtroom Dec. 5 as he explained to the judge what his participation in the Jan. 6 riot cost him.

“I lost friends,” Tenney said. “I lost income. … I will never make this mistake again.”

Judge Hogan said he was moved by pleas from Tenney and his supporters. He agreed to reduce Tenney’s sentence below the roughly four years recommended by federal probation officials and prosecutors. But Hogan said Tenney’s sentence must also reflect the severity of the violence at the Capitol and the lasting harm it did to the country.

Tenney will begin his sentence in January, two years after the riot.