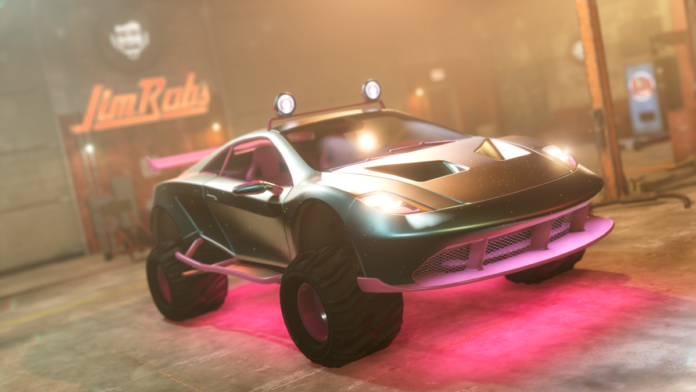 Saints Row, the upcoming reboot of Volition’s excessively silly open-world crime series, will include heaps of customization options, letting you change the appearance and function of your character, vehicles, weapons, gang, and HQ in intricate detail.

Revealed during a preview showcase and press briefing, the customization options in Saints Row range from the silly to the extreme. Its character creator will let you tweak the physique of your Boss in granular detail, shaping the bone structure of their face, eyebrow placement, torso shape, and even their vein definition. Hair options cover a variety of textures and styles that go beyond traditional Western haircuts, and prosthetic arms and legs are available, too.

There are some pretty outlandish options. You can change your skin to a range of weird materials, including rock, glass, or what looks like a cosmic pattern of galaxies. Volition is also placing great emphasis on the ability to create asymmetrical faces, meaning you can change the shape of your eyes and ears individually, or alter the muscle shape of one half of your character’s face.

Cosmetics get a big look-in, too. Shirts, pants, socks, hats, gloves, and other items of clothing can all be swapped out, letting you pick between everyday outfits and straight-up silly garms. Think everything from leather jackets to helmets shaped like dinosaur jaws.

Clothes can also be layered on top of one another, so you’re not locked to specific outfits, and every piece of clothing is gender-neutral, letting you dress up your crime lord in whatever option takes your fancy.

For vehicles, you’ll be able to customize each component of your ride – from fenders, bumpers, roofs, side panels, tire profiles, hub caps, and even axel height. They can be painted in a variety of colors. Even the sound of your car horn, engine, and transmission can be changed.

Alongside these cosmetic changes, you’ll also be able to upgrade your vehicles with functional upgrades, including nitro boosts, off-road wheels for driving across deserts, ejector seats, and a toeing cable that lets you drag objects behind you. Volition says that each type of vehicle in the game – including cars, bikes, hoverboards, and boats – will feature the same kind of granular customization.

The options available are pretty expansive. In the customization showcase, we spotted monster trucks decked out with metallic plating, motorcycles covered in neon lights, and a car that was essentially a sailing ship on wheels.

Weapons can similarly be personalized with paint jobs and decals. You can change the texture of individual components, so the barrel of your assault rifle can be a lovely lime green while the magazine is a rusty camouflaged brown. On the sillier side, you can swap between gun models, letting you stuff an RPG into a guitar case, change your default assault rifle into an umbrella, or walk around with a pinata stick instead of a crowbar.

Finally, your HQ – which acts as a hub for your gang and criminal enterprise – can be modified to showcase the various purchases and trophies you’ve collected in-game. The weapons, clothing, and vehicles of your entire crew can also be changed from here. So, when they roll up to help you in a firefight, they’ll be wearing your chosen uniform. Of course, you can make them look as ridiculous – clowns piling out of a tiny hatchback – or as brutal – paramilitary squad rushing out of a 4×4 – as you want.

Volition says you’ll be able to play around with the character creation tools ahead of the game’s launch on August 23, with a downloadable preview launching sometime in the next few months.