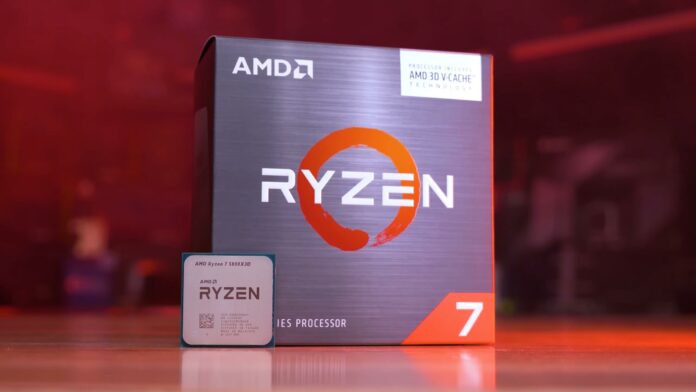 We recently compared the new AMD Ryzen 7 5800X3D and Intel Core i9-12900K flagship head to head in 40 games and found that overall they offer a similar gaming experience. Of course, they traded blows, but overall much of a muchness. Still, there were loads of interesting data points and this motivated us to include the original 5800X in a new comparison, allowing us to see where that massive L3 cache can help out.

On the menu today is another 40 game benchmark — actually 41, because we’ve included one more title in the form of Microsoft Flight Simulator. This time it’s the 5800X3D against its spiritual predecessor, the 5800X, tested across three resolutions using the RTX 3090 Ti.

As of writing, the 5800X3D has yet to go on sale, so we’ve still to discover just how many of these things AMD has to sell, and at what price they’ll be available. AMD says $450, so we’ll have to go with that for now.

When compared to the Core i9-12900K, the 5800X3D is exceptionally good value (at least for gaming), priced almost 30% lower and then you have the memory cost which is significantly less assuming you want to unlock the full potential of the Core i9 part. You can pair the 12900K with DDR4 memory, but then it will still cost more than the 5800X3D and will be slower.

So when it comes to “ultimate gaming performance,” Intel and AMD are currently tied, but the 5800X3D is far more affordable, more power efficient and easier to cool, making it a more practical solution for a pure-gaming build. But what about for those of you who want high-end gaming performance, but aren’t interested in paying a premium for the “ultimate” gaming?

The goal of today’s benchmark session will be to measure where the 3D V-Cache boosts gaming performance, and to see if it’s worth spending the extra 32-55% on the 5800X3D.

Both AMD CPUs were tested using DDR4-3800 CL16 memory with the MSI X570S Carbon Max WiFi. This is the fastest memory we can use with the Ryzen 7, while running at a 1:1 ratio with the FCLK. We’ve enabled Resizable BAR using the GeForce RTX 3090 Ti. Now onto the testing…

Starting with Valorant, we find a solid performance uplift from the 5800X3D. An 18% increase for the average frame rate at 1080p and a 24% boost to 1% slows and similar figures were also seen at then the 5800X3D will probably appeal to you.

Even at 4K, the 5800X3D was up to 19% faster which is remarkable and although most competitive players target 1080p, or maybe 1440p, I certainly appreciate the boost at 4K as this is where I play Fortnite.

Call of Duty Warzone players rocking a Zen 3 processor will see a substantial performance uplift with the 5800X3D when CPU bound. Here the new 3D V-Cache model was up to 26% faster, inline with what was seen in Fortnite. This margin was seen at 1080p and 1440p when looking at the 1% lows, though the game became entirely GPU limited at 4K.

Many of you were very excited to see ACC included in the previous benchmark, and yes we’ll be including it moving forward. The gains for the 5800X3D are incredible as we’re looking at an improvement in 1% lows of up to 53%, with a 43% boost to the average frame rate.

We’re even seeing a massive 30% improvement to 1% lows at 4K, so the 5800X3D is much faster than the 5800X across the board in this title, suggesting that this is a very cache sensitive game.

Cities Skylines is basically a single core game, which is why we’re seeing such an extreme CPU bottleneck at a relatively low frame rate. The 3D V-Cache does help, boosting performance by almost 20% across the board, and you’ll certainly notice this improvement.

StarCraft II is another single core game and this one runs very poorly late game unless you have a modern processor. Here we’re seeing a massive 52% improvement in 1% lows with the 5800X3D and a 32% increase for the average frame rate.

Interestingly, very little improvement was seen in Apex Legends, at most a 9% increase to 1% lows was seen at 1080p, with a 3% boost to the average frame rate. For those of you primarily playing Apex, the 5800X3D isn’t going to be worth the investment.

The same is true of Dying Light 2, particularly if you’re playing at 1440p or higher resolutions, and especially so if you’re doing so with a slower GPU than the RTX 3090 Ti. So while the massive 3D V-Cache can be of great benefit on some titles, that won’t always be the case.

The performance uplift for Rainbow Six Siege is quite tame. We’re looking at a 9% boost at 1080p, followed by nothing at the GPU limited 1440p and 4K resolutions.

Moving on to Halo Infinite, we’re looking at a 35% improvement for the 1% lows at 1080p and a 23% increase to the average frame rate. Those margins were reduced to 22% for the 1% lows and just 6% for the average frame rate before seeing performance basically neutralized at 4K. The boost from the 5800X3D at 1080p and 1440p is quite significant as it meant 1% lows were now above 100 fps.

Even with slightly dialed down quality settings, Red Dead Redemption 2 is mostly GPU bound, as seen at 1440p and 4K. There are some gains to be had at 1080p where the 5800X3D was up to 16% faster, so a good uplift there, though we suspect under most gaming conditions there will be little to no difference between these two CPUs on this title.

For some reason the 1% low performance of the 5800X is quite weak in The Outer Worlds. This Unreal Engine 4 title has never played well with AMD hardware, but the 5800X3D does go a long way towards changing that.

At 1080p the 1% lows were improved by an incredible 57% margin and although the uplift to the average frame rate was less extreme, a 22% boost is still impressive. The margins shrink at 1440p and are almost entirely eliminated at 4K.

For the 12900K vs. 5800X3D comparison we didn’t include Microsoft Flight Simulator, because we couldn’t get it to work. Let me elaborate. On our AMD test system, the simulator works just fine, but on the Intel system we ran into what’s known as the “infinite login loop,” a bug that’s been widely reported on by users.

We tried every suggestion we came across to fix this issue, but no joy. I simply cannot log into my account on our Intel test system. We went to Twitter with this issue and Paul Alcorn from Tom’s Hardware said they’ve had the same issue for months now and have been unable to find a solution. So for now we won’t be able to provide any Intel results, but here is how the 5800X3D and 5800X compare.

We just looked at a little over a dozen of the games tested, but with 41 in total, there’s a lot more data to go over. So let’s take a look at the breakdown graphs covering the 1080p, 1440p and 4K resolutions.

At 1080p, the Ryzen 5 5800X3D delivered an average 15% performance bump over the original 5800X, which is impressive and inline with AMD’s claims. Out of the 41 titles, just 10 saw performance gains of 5% or less, which we deem insignificant.

There were 25 games where the performance margin was 10% or greater, and then 13 titles where gains exceeded 20%. That means for 32% of the titles tested the gains were what we’d call very significant.

Moving to 1440p reduced the margin to 9% in favor of the 5800X3D as the testing became more GPU bound. Unless you play at low quality settings or have an extremely fast GPU, performance for the most part is going to be similar, with nearly 70% of the games we tested seeing single-digit gains.

Then at 4K we’re almost always GPU limited, with the exception of a few titles. StarCraft II which is now a 12 year old game, only utilizes a single core, so even at 4K we’re still heavily CPU bound and the same is true of Cities Skylines.

Valorant isn’t as CPU bound, but it doesn’t push the graphics card very hard, shifting the limitation more towards the CPU. For the rest of the games though, we’re mostly looking at GPU limited performance.

Also worth checking out the 1080p 1% low data, which shows a more significant improvement for the 5800X3D when compared to average frame rates. On average, the 1% lows were improved by 22%, and we’re seeing extreme examples of 50% or greater gains in StarCraft II and ACC. Moreover, there are 22 games where the gains exceeded 20%, with just a handful of titles showing single-digit gains. The 5800X3D doesn’t simply enable higher frame rates, but also smoother performance when compared to the 5800X.

We observed impressive gains from the Ryzen 7 5800X3D over the original 5800X, it’s simply a much better gaming CPU. But is it worth paying more than a 30% premium for, or a little over 50% when compared to the new 5700X? That will depend on the games you’re playing, how you’re playing them, and what kind of performance you’re after.

If the goal is to secure the best gaming performance possible, then by all means, the 5800X3D is it. Either that, or the Core i9-12900K, though you’ll have to spend a lot more money on the Intel side.

If you’re playing games such as StarCraft II, Watch Dogs Legion, ACC, F1 2021, Battlefield V and other titles where the performance jump was significant, and you’re after more performance than the 5800X can deliver, then the 5800X3D will be the obvious choice. But, if you don’t have the GPU power to take advantage of that extra headroom, or won’t be playing at lower quality settings, then the 5800X3D won’t be any faster than the 5800X for the most part — or the cheaper 5700X for that matter.

The 5800X3D is an impressive gaming CPU and it demonstrates just how many options AMD now has available to make their CPUs a lot faster for particular tasks. That won’t make it the best value, but for a small premium AMD is delivering up to 50% more performance with 15-22% more on average depending on the metric/game you look at.

How impressive of an achievement will ultimately depend on pricing and availability, something we should have a good handle on the coming weeks (based on what we’ve been hearing, it doesn’t sound too promising). For now, that’s going to do it for this comparison, coming up next we’ll compare the 12700KF against the 5800X3D and 5800X to determine which brand offers the best value high-end CPU for gamers.