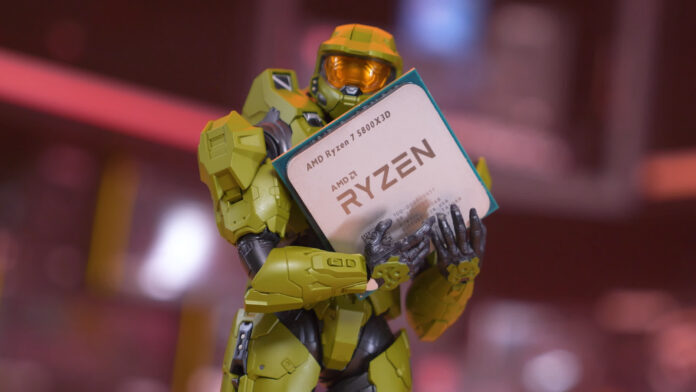 Today we’re taking yet another look at the Ryzen 7 5800X3D with a big 40 game benchmark, but this time instead of comparing it to Intel’s flagship, the Core i9-12900K or even the KS model, we’ve prepared a shootout against the much more sensible Core i7-12700KF.

For a vast majority of gamers, the 12700KF is a more sensible choice because at just $370 you’re essentially getting i9-12900K performance for nearly a 40% discount. That saving is important for a few reasons. First and foremost, it’s money you can save or spend elsewhere in your new build, and in the fight with the Ryzen 7 5800X3D, AMD claims their high-end gaming solution is at least 40% cheaper when factoring in the cost of the CPU along with the entire platform.

So you might think, why didn’t we start with the 12700KF since it’s more of an apples to apples comparison in terms of pricing? The reason is that AMD claimed in their press launch and marketing material that the 5800X3D is now the world’s fastest gaming desktop processor. According to our own testing, depending on how you configure the 12900K and the games you use, that is technically correct, though we’d argue it’s one of the world’s fastest gaming processors as it basically matches the 12900K and KS across a wide range of games… more than the 20 AMD tested anyway.

Our initial testing set out to investigate AMD’s claims, and to review the 5800X3D from the “ultimate gaming CPU” angle. Now, for those of you seeking high-end performance, but also care about getting the most bang for your buck, it’s time to see how AMD’s V-Cache creation stacks up to what we feel is the best value high-end option from Intel, the Core i7-12700KF, so let’s get into it.

For testing the Core i7 processor we’re using the MSI Z690 Tomahawk WiFi DDR4 motherboard, while the Ryzen 7 5800X3D has been tested on the MSI X570S Carbon Max WiFi, and we’ve also included the standard 5800X CPU for reference.

Instead of using super expensive DDR5 memory with the 12700KF, which doesn’t make sense from a value standpoint, both CPUs have been paired with DDR4-3800 CL16 memory. Not only is this an apples to apples comparison, but we think it’s a more realistic configuration. Other test system notes to be aware of, we ran tests using Resizable BAR enabled on the GeForce RTX 3090 Ti.

Starting with Valorant, we see that the 5800X and 12700KF are evenly matched, with the original Ryzen 7 CPU only winning by a few percent. That being the case, the 5800X3D was up to 28% faster at 1080p when looking at the 1% lows and even at 4K maintained a 22% margin. A clear win for the 5800X3D, though we’re not sure how many of you will notice the difference, but I’ll leave that up to the pro gamers amongst you to decide.

Interesting testing with Cities Skylines sees the 12700KF matching the 5800X3D, making it 18% faster than the standard 5800X. A solid result here for the Core i7 part, more so when you consider how much cheaper it is than the 3D model.

Another game where the 12700KF performs really well is StarCraft II where it basically matched the 5800X3D, which is impressive given the 3D version was over 50% faster than the standard model.

Apex Legends is pretty well GPU limited in our testing with these high-end CPUs as all can drive well over 200 fps at 1080p using the RTX 3090 Ti. The 12700KF does appear to sit between the two Ryzen 7 processors and if you require no more than 260 fps on average, then any of these CPUs will work just fine.

Dying Light 2 isn’t exactly a CPU heavy game and as an action role-playing, survival horror it doesn’t exactly require hundreds of frames per second, so 160 fps at 1080p is probably enough and it was certainly enough to match the 5800X3D, though the 1% lows were 8% lower. Still comparable performance overall.

Last up we have Death Stranding and here the Intel CPUs behave quite oddly, delivering relatively strong 1% low performance with weak average frame rate performance. As a result the 12700KF was 4% faster than the 5800X at 1080p when looking at 1% lows, but 14% slower for the average frame rate. This meant the 5800X3D was up to 31% faster than the Core i7 processor. Of course, this is a single player game, so pumping out over 160 fps in our testing at 1080p is likely more than sufficient for this title.

We’ve just looked at a little over a dozen of the games tested, but with 40 in total there’s a lot more data to go over, so let’s take a look at the breakdown graphs covering the 1080p, 1440p and 4K resolutions.

With both CPUs using DDR4-3600 CL16 memory, the 5800X3D is the faster gaming processor, but that margin is quite small for the most part.

At the more popular 1440p resolution for high-end gaming, the CPU plays less of a role as games become more GPU bound, even with an RTX 3090 Ti. Here the 5800X3D was just 5% faster on average, with just 7 games where we observe double digit margins.

As expected, at 4K the 5800X3D was just 1% faster on average and now the vast majority of the games tested were entirely GPU bound.

For those of you interested, the 5800X and 12700KF were evenly matched overall. The Ryzen 7 CPU was a bit slower, though only by a 5% margin on average. There were just 10 games where the 5800X was slower by a 10% margin or greater, and then just a single example where it was faster by a double digit margin (Death Stranding). Then there were 17 games where the margin between the two was 5% or less in either direction which we deem a tie.

The Ryzen 7 5800X3D is without question one of the top gaming CPUs, but does it actually make sense to buy one when compared to more competitively priced options such as the Core i7-12700KF? Well, let’s explore that…

Right now the Core i7-12700KF will set you back $370, while the non-K version which delivers basically the same out of the box performance shown in this review costs $310.

The Ryzen 7 5800X3D is meant to be $450, but right now is out of stock everywhere. All retailers are listing it for $450, but with no stock you’ll have to deal with a 3rd party seller who has tacked on an extra $50. But let’s give AMD the benefit of the doubt and say the 5800X3D is $450 in the hope that stock levels will improve — though we have to say we’re not very confident.

Based on the performance-value comparison above, the ultimate takeaway is that there’s no clear winner… but, you do get a few excellent options that are true top choices.

If AMD can actually meet the demand for the 5800X3D, it’s competitive with the 12700KF in terms of value, while the other Ryzen 7 parts cover off the 12700F. But if you’re not just gaming with your PC, then the Core i7-12700 series becomes a lot more appealing as it generally offers much better performance than Zen 3-based Ryzen 7 processors.

The best way to break it down is this…

If you want to build a high-end gaming system with the goal of receiving the best performance possible without going overboard on the cost of stuff like memory, then the 5800X3D is the way to go. However, if you’re merely after a strong gaming CPU that’s also great for general use and productivity, then we’d say the 12700 variants are better all-rounders.

The more affordable 5700X is a nice addition to the Ryzen lineup, even if it arrived a tad too late, but even then the 12700F is going to be the better value option given it’s faster for gaming and much faster for most productivity applications, whether they are single or multi-core.