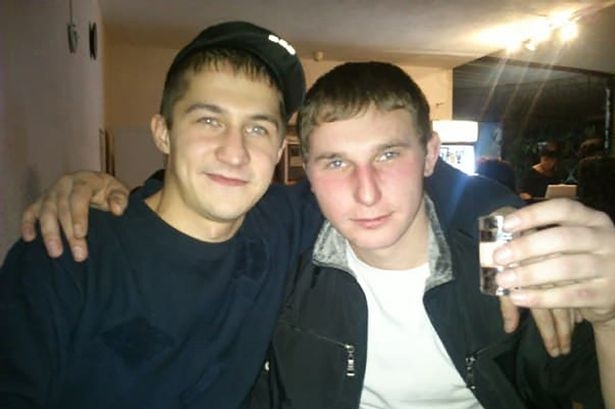 A Russian father who killed his friend after allegedly finding footage of him raping his eight-year-old girl has been released from custody amid calls not to charge him with murder.

Factory worker Vyacheslav M, 34, was drinking with his friend Oleg Sviridov, 32, when he allegedly saw video of his daughter being abused on Sviridov’s phone.

Vyacheslav immediately confronted Sviridov who fled, but he was eventually tracked down by the distraught father who stabbed him to death.

The killer has now been freed from jail and put under house arrest for two months pending an investigation.

Normally suspected killers would not be freed but there has been an outpouring of public support for the father, including from prominent journalists on Russia’s tightly-controlled broadcast news.

It has since been reported that one of his alleged victims was the daughter of his former live-in partner.

‘The woman had a daughter from her first marriage,’ a friend told Moskovsky Komsomolets newspaper.

‘Now it has turned out he was abusing the child.’

The ex-lover did not know anything about it, said the woman friend who had known Sviridov for more than 15 years.

‘She is a very good caring mother,’ she said. ‘I can imagine what she feels like now the truth has come out …

‘He was constantly seen with the girls, the daughter of his partner and Vyacheslav’s older daughter, in the village. It never crossed anyone’s mind what he was doing with children.’

Sviridov’s body was discovered by police on Thursday, more than a week after Vyacheslav had seen the abusive video.

Vyacheslav had reported the rapes to local police who had launched a manhunt for Sviridov but the father managed to track down the alleged child abuser before the cops.

Vyacheslav later told police that Sviridov had ‘stumbled on the knife during a quarrel’ in a forest near the village, purporting that he had not intentionally murdered him with the blade.

Police sources said that the deceased man’s phone contained other sickening videos which showed violent rapes of other village girls, aged six and 11.

The videos indicated that the dead suspect had been abusing children for five years before Vyacheslav discovered the footage on his phone.

Villagers in Vintai and online commenters alike have demanded that Vyacheslav should not face a murder charge.

‘He is not a murderer – he protected his daughter and our children too,’ said one local.

‘Everyone is on his side.’

Prominent TV journalist and former Russian presidential candidate Ksenia Sobchak told her followers: ‘All parents are standing up for the paedophile’s killer.’

Another commenter Anna Plekhanova said: ‘If the crime is proven by video facts, then is the girl’s father wrong?

‘Any normal parent, mother or father, would have torn apart such a paedophile right on the spot.

‘Protecting children is the direct responsibility of parents.’

Yulia Salinder added: ‘It’s good that he killed the bastard because our law would have put him in jail for only eight years – or even less – and he would be out again.’

Vladimir Novikov said: ‘It is necessary to introduce the death penalty for paedophiles or we will see the lynching of non-humans.’

Svetlana Katargina commented: ‘The father can be understood.

‘Such wild creatures have no place in this world and paedophilia cannot be cured.

‘Perpetrators get out of jail and start to rape children again.’

Sviridov’s mother said that her son had often been a babysitter for Vyacheslav’s children and the two men had been long-time friends.

‘I don’t know how it got to this,’ she said, referring to the rape of Vyacheslav’s daughter.

‘He must have been drunk. Most likely he was drunk. They left their children with him all the time.

‘When he baby-sat these girls he came back home as normal, in a good mood.’