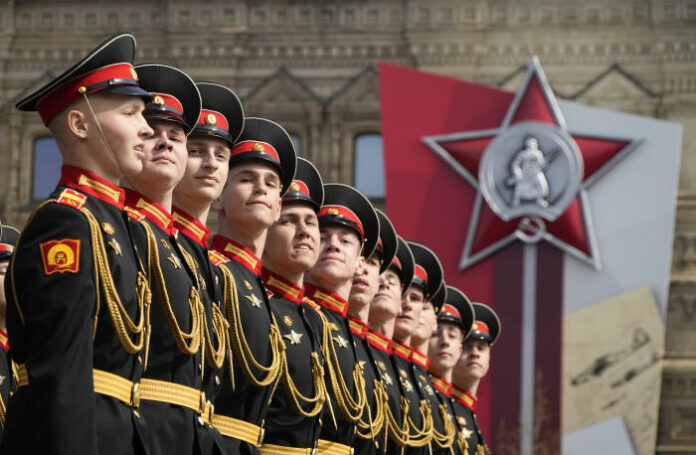 Russian servicemen march during a dress rehearsal for the Victory Day military parade in Moscow, Russia, Saturday, May 7, 2022. The parade will take place at Moscow’s Red Square on May 9 to celebrate 77 years of the victory in WWII. (AP Photo/Alexander Zemlianichenko)

MOSCOW – Russia held a dress rehearsal on Saturday for the military parade to commemorate Victory Day on May 9, when the country marks the defeat of Nazi Germany during World War II.

This year’s Victory Day, which falls on Monday, won’t just honor a conflict that ended 77 years ago. Many Russians will be thinking about the thousands of troops in neighboring Ukraine. Signs of support for the military have grown across the country since Feb. 24, with the letter “Z” appearing on billboards and signs in the streets and subways, and on television and social media.

On Saturday, an RS-24 Yars intercontinental ballistic missile rolled through Red Square as part of the rehearsal in Moscow, with warplanes and helicopters flying overhead, troops marching in formation and self-propelled artillery vehicles rumbling past.