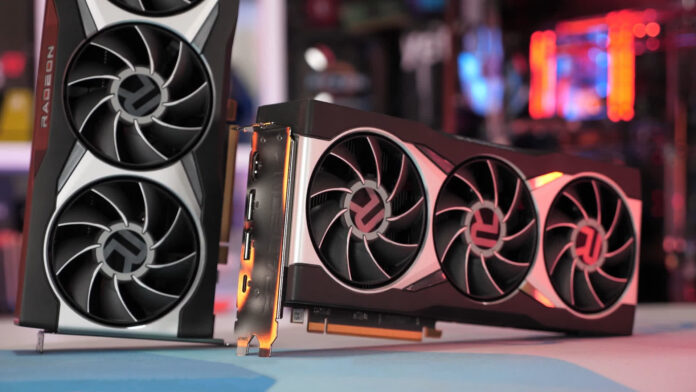 In brief: There is now little doubt that a trio of refreshed RDNA 2 graphics cards will land on the market in the coming weeks. However, a number of etailer listings suggest the price of the RX 6950 XT is going to be just as absurd as that of Nvidia’s RTX 3090 Ti. One can only hope the same does not apply to the RX 6750 XT and the RX 6650 XT.

Earlier this week, an RRA listing signaled the imminent launch of AMD’s refreshed Radeon RX 6000 series graphics cards – the RX 6650 XT, RX 6750 XT, and the RX 6950 XT. The new cards will come with 18 Gbps GDDR6 memory and potentially higher boost clocks, as a sort of stop-gap solution until RDNA 3 is ready.

As spotted by Tom’s Hardware, a separate listing on the Eurasian Economic Commission’s website hints that Gigabyte will have custom models of its own and possibly even a couple of low-end RX 6400 cards. The pricing remains largely a mystery, but that and the availability of the new cards will be crucial to their success, even as Intel has failed to capitalize on the optimal time window for releasing its Arc A-series desktop GPUs.

The only thing we’ve got on pricing is a series of retail listings for the RX 6950 XT, courtesy of popular Twitter leaker momomo_us. These are for Gigabyte’s Aorus and Gaming series models as they appear on Australian etailer sites like MegaBuy and ITNest.

If these prices are any indication, it seems like AMD is looking to compete with Nvidia for which company can set the price higher for enthusiasts who want the best of the best GPU and are willing to pay for it. A quick glance over on Newegg reveals a Zotac RTX 3090 Ti listed at $2,099, while EVGA’s FTW3 Gaming model is listed at $2,850 on Amazon. The RX 6950 XT may end up in the same price range, but we’ll have to wait and see.

With the ever-improving pricing and availability of GPUs, it would be disappointing to see AMD apply absurd prices to all of its upcoming cards. While quite a few gamers have demonstrated they’re willing to pay $300 more when upgrading to Nvidia’s RTX 30 cards when compared to their old cards, the same cannot be said of AMD’s RX 6000 series. And with Intel aiming to launch desktop Arc A-series GPUs this summer, AMD only has a small window of opportunity to draw gamers to its RX 6×50 XT cards.