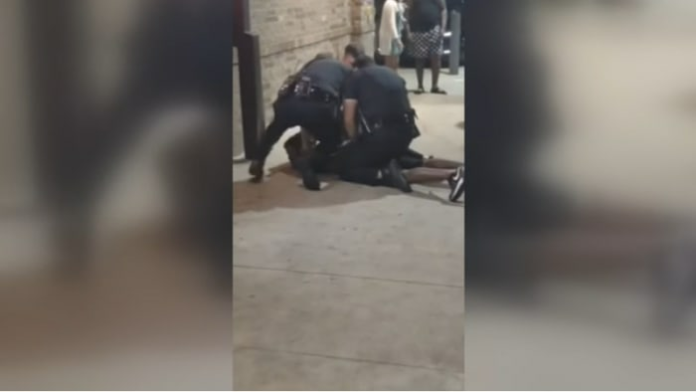 JACKSONVILLE, Fla. – Relatives of two men who were arrested at a Raceway Gas Station on Lem Turner Road tell News4JAX that officers went too far during their apprehensions.

According to an arrest report, police were conducting an investigation Saturday in the gas station parking lot that was connected to a police raid two miles away in a grocery store parking lot where suspected street racers were reportedly gathering.

In a video shared with News4JAX, 29-year-old Jermaine Mitchell is seen being wrestled to the ground by two police officers, attempting to take him into custody.

According to the report, Mitchell was being trespassed and refused to provide identification to officers. Police say when they attempted to detain him, he resisted, then he is seen being tackled to the ground.

Moments later, while officers are on top of him, we see one officer strike Mitchell in what appears to be his head while the front of his body is facing the ground. The report states that Mitchell continued to physically resist, so the officer struck him in the face to gain compliance.

Shortly after, his mother, Taunya Tyson, arrives. She sees what’s happening to her son and appears to try and intervene as her son is being led away. Officers attempted to take her into custody when, moments later, we see what appears to be Tyson being slammed into a wall.

“They just snatched me up. All I wanted to know was why they were grabbing my son, Jermaine Mitchell,” Tyson said.

Both the mother and son were taken in custody.

Mitchell is said to be friends with 22-year-old Andre Brown, who was also arrested that night at the gas station. According to an arrest report, when police swarmed the scene two miles away, Brown escaped and led officers on a car chase that ended at the gas station.  We don’t have video of his arrest, but his aunt, Stephanie Green, said her nephew was also beaten during his apprehension.

“And there were several witnesses, people who had nothing to do with street racing, that said these young men were at this gas station and were not resisting arrest. So, why were they punched? Why were they thrown to the ground? That’s my question for JSO,” Green said.

According to the report, Brown resisted and was forced to the ground.

Green said she wants JSO to release all bodycam videos from the incident.

News4JAX emailed unedited copies of the videos to the public information office and a separate email asking if JSO would respond to the videos, but a response wasn’t returned by publication of this article.