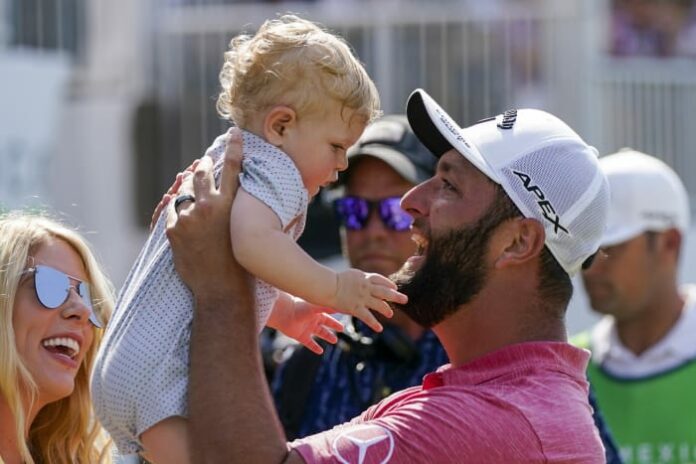 PUERTO VALLARTA – Jon Rahm pulled out of a four-way tie with a 12-foot birdie putt on the 14th hole and then held on with pars for a 2-under 69 and a one-shot victory Sunday in the Mexico Open.

Rahm won for the first time since the U.S. Open last summer at Torrey Pines, and the relief showed in the smile and the way he pumped his arm and then pounded down his fist after tapping in for par on the 18th at Vidanta Vallarta.

Tony Finau and Brandon Wu each closed with a 63, while Kurt Kitayama birdied the final hole from a back bunker for a 68. They tied for second.

Against one of the weaker fields of the year — Rahm at No. 2 was the only player from the top 15 in the world — the Spaniard was a heavy favorite and he played that way from his opening 64. He just didn’t feel any expectations.

“I like to think every time I tee it up I’m a favorite. I play to win,” Rahm said. “Fortunately, I got my seventh PGA Tour win. It was a pretty stressful weekend, all the way to the end.”

Staked to a two-shot lead going into the final round, he never trailed. But it was never easy.

Rahm’s had a one-shot lead after his lone bogey of the round on the tough par-4 10th.

Well ahead of him, Wu holed a 25-foot birdie putt on the 16th hole to join him at 16 under. Kitayama, playing in the final group with Rahm, got up-and-down from right of the green on the par-5 12th to tie. And then Finau went birdie-eagle-birdie to get in the mix and capped off his 63 with a birdie to make it a four-way tie.

Rahm never lost his patience. His chip left of the green on the par-5 14th raced 12 feet by the hole, but he hit his best putt of the round and made it for birdie for a one-shot lead.

His wedge to the 15th came up short and his chip ran 5 by the hole. He made that to stay in front, and then had to two-putt from 50 feet on the 16th for his par. Rahm missed a 10-foot birdie putt on the 17th that would have given him room for error.

Still, the closing par 5 at Vidanta Vallarta is easy reachable, and Rahm birdied it the three previous times. This time, his fade stayed straight and instead of dropping into the bunker, it nestled in deep rough on a steep slope just above the sand. He did well to punch that out just over a waste area and into the fairway.

His approach to a back pin just trickled off the green, and he navigated the slick putt perfectly to a few inches. Instead of waiting for Kitayama and Cameron Champ to finish, Rahm quickly stepped in and closed the deal.

“I didn’t think a par 5 that requires a fade that I’d be stressing this much,” Rahm said. “It wasn’t my best putting weekend, but I stayed aggressive. I was confident in what I was doing. I have faith in every part of my game and it showed.”

Champ, who like Kitayama started the final round two shots behind, took himself out of the mix with a triple bogey on the par-4 eighth hole. He never recovered, shot 70 and finished three shots behind in a tie for sixth.

Rahm has 14 victories worldwide. He had gone 17 starts without winning, matching the longest such in is career. The victory moves him a little closer to Scottie Scheffler in his bid to reclaim the No. 1 ranking, and he’ll a have at the PGA Championship in three weeks.

The Spaniard has at least one victory in six full years as a pro.