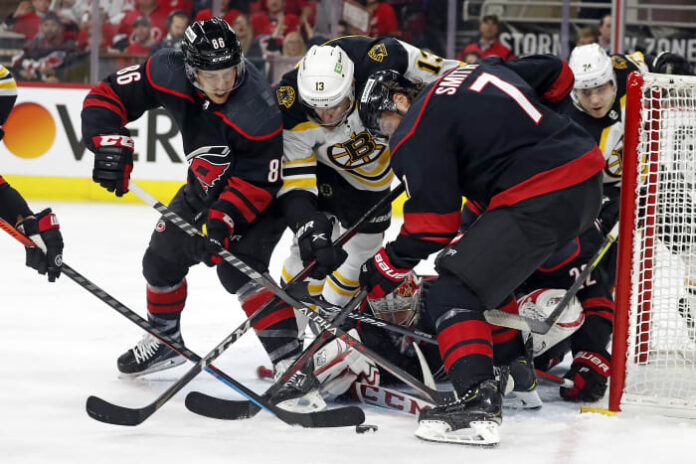 RALEIGH, N.C. – Seth Jarvis and Nino Niederreiter scored second-period goals and Antti Raanta was strong in net to help the Carolina Hurricanes beat the Boston Bruins 5-1 on Monday night in Game 1 of their first-round playoff series.

Raanta had 35 saves in his first career postseason start with No. 1 goaltender Frederik Andersen sidelined by injury. He held up against Boston’s game-opening surge to keep Carolina in it before Jarvis and Niederreiter scored roughly two minutes apart in the second period to break a scoreless tie.

Carolina never surrendered that lead. Teuvo Teravainen and Vincent Trocheck added third-period goals, which helped Carolina maintain control and then stretch out a lead in this best-of-seven series opener.

Andrei Svechnikov punctuated the win with an empty-net goal at 17:59, capping what turned into a dominating third period against a team that has twice ousted Carolina from the playoffs in recent years.

Taylor Hall scored for Boston early in the third, beating Raanta between the circles after a feed from Erik Haula from a tussle behind the net. He almost tied the game minutes later when he pinged the left post. But those were the only real mistakes for Raanta, who made the routine glove stops along with the more impressive diving saves or post-to-post slides.

The Hurricanes won the Metropolitan Division, marking the second straight season they won a division title. And they have gone from having a nine-year playoff drought to reaching the postseason for the fourth straight season, the first time that had happened since the former Hartford Whalers relocated to North Carolina in 1997.

But the first two of those runs ended against the Bruins, first in a four-game sweep in the Eastern Conference Finals in 2019 followed by a five-game loss in the first round of the Toronto bubble a year later.

This time, they’re starting with a series lead.

Linus Ullmark finished with 20 saves for the Bruins, who have lost all four matchups with Carolina this year by a combined score of 21-2.

NHL Commissioner Gary Bettman was in attendance, laughing and offering a wave while hearing hearty boos while being shown on the videoboard during a second-period stoppage.

Retired Hurricanes captain Justin Williams cranked the pregame storm-warning siren for the team to take the ice, followed by Kim and Penn Holderness – a Raleigh family who recently won CBS’ “The Amazing Race” reality competition show – for the second period.

North Carolina men’s basketball coach Hubert Davis was the siren sounder for the third. The first-year coach led the Tar Heels to the NCAA championship game and heard plenty of cheers in the arena the Hurricanes share with UNC rival North Carolina State.

Game 2 is Wednesday in Raleigh.