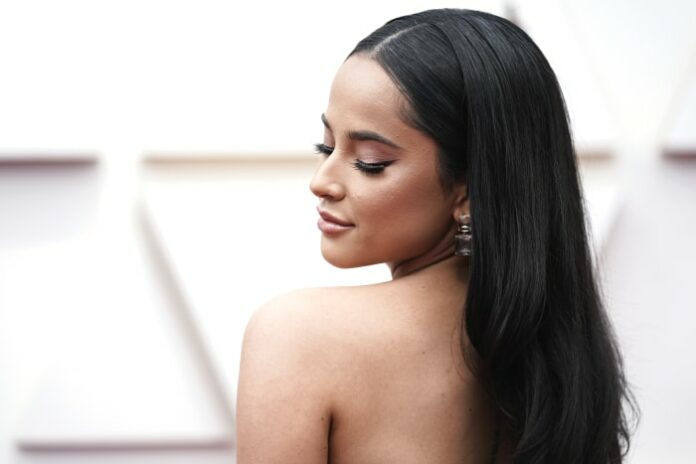 NEW YORK – Becky G finds every bit of her represented in the songs of her new album, “Esquemas.”

The 14-track “Esquemas”, which is out Friday and can be translated as outlines, includes the hit “Mamiii” with Karol G, as well as the previously released singles “No Mienten”, “Fulanito” with El Alfa, “Bailé Con Mi Ex” and “Ram Pam Pam”, with Natti Natasha.

It opens with the uplifting “Buen Día” and invites to dance and move with a mix of rhythms like pop, reggaeton, cumbia and hip-hop, in titles like “Tajín,” “Guapa,” the murky banger “Kill Bill” and the sensual “Una Más.”

“That definitely was the intention,” said the Mexican-American singer in an interview.

“I think throughout the pandemic we’ve all had our own personal experiences,” she said. “For me, it gave me time to think about things that were more important in life. Not about ticket sales or how many streams I got on a song … but (about) my family, my health, my mental health. And I was able to create music just to create music.

“’Esquemas’ is literally a genre-bending or genre-less album. Its songs are really just based on storytelling, real, true emotion and empowerment, for sure.”

Becky G, whose real name is Rebbeca Marie Gomez, also spoke about “Dolores,” a touching song inspired by her “abuelita” (grandmother), and how important it’s been for her to honor her immigrant grandparents by staying true to her roots and singing in Spanish.

Remarks have been edited for brevity and clarity.

AP: You open the album with the uplifting “Buen Día” (“Good Day”), where you sing that you woke up wanting to eat the world and that you weren’t born to lose. Tell us a bit about that song.

BECKY G: “Buen Día” is intentionally put as song No. 1 on my album because that is even a reminder to myself on my bad days that it’s never too late to have a good day, and that a day above ground it’s a success in itself, and that life is beautiful! You know, it’s an affirmation. There’s a lyric where I say: “Hice un pacto con la mujer del espejo / si yo estoy bien, ella está bien” (I made a pact with the woman in the mirror / if I am good, she’s good), basically saying like, that connection that you have with yourself is so important, and taking care of yourself and accepting yourself for who you are. That’s what I love about “Buen Día”. When I go on tour and I’m tired and I may be having a (expletive) day, I’m gonna sing that song and be like, “Listen to yourself, Rebbeca!”

AP: The album closes with the hit “Mamiii”, which had massive success in the global charts with over 350 million streams globally. How did this collab with Karol G come to be?

BECKY G: I’ve invited Karol to be a part of so many songs in the past and it never happened, not because we didn’t want to work together but because of the timing or of it wasn’t the right song. The serendipity of it all was that I wasn’t looking for it — like my grandma says, “Si Dios quiere (If God is willing) is when is gonna happen”. And that’s what happened.

(Producer) Ovy sent it to me during the holidays. I loved the chorus, I loved the style of production he was leaning into and I told him, “I wanna add more regional Mexican elements, more guitar and a little ‘grito’ (scream) in the beginning” because, you know, it’s a song that reminds me of the feeling that my mom would have when she would listen to artists like Ana Gabriel or Jenni Rivera, songs that you basically scream out because it feels so good and so cathartic. So “Mamiii” was done, and I guess Ovy played it for Karol and she FaceTimed me saying: “This is it, this is the one”. And I was like “This is it, ladies and gentlemen, this is the one!” I’m so thankful.

AP: You have a song called “Dolores” in which you tenderly try to console and uplift a woman that’s crying. Who is Dolores?

BECKY G: “Dolores” is a song that I literally would dedicate to my younger self, to my “abuelitas” (grandmothers), to my mom, to my baby sister, to any woman in my life that has ever felt unseen or misunderstood. “Dolores” is literally if you ripped out pages from my diary, and I think that’s what’s so special about “Esquemas”, that in every song I can hear myself. “Dolores” is one of those vulnerable songs. I was specifically inspired by my grandma, who’s not named Dolores, by the way, her real name is Guadalupe but my “tíos” (uncles) jokingly call her Dolores (pains) because “Ay Guadalupe, todo te duele” (Oh Guadalupe, everything hurts you). I think that song is really special.

AP: You are fully bilingual, and although you sing mostly in Spanish, you have also recorded music in English. Where do you feel more comfortable?

BECKY G: You know, I feel comfortable in Spanglish. I can do interviews in Spanish and English, and I’ll always end up speaking Spanglish anyways. That’s just part of who I am and how I grew up. My “abuelitos” (grandparents) only speak Spanish, so I learned Spanish at the same time that I learned English. But I think I actually feel more confident expressing myself through music in Spanish. I found myself as a young woman in my sound and my music in Spanish, and I think you can really hear that, because I was so young when I got signed — I was 14, and I’m 25 today.

I only started in English in music because that’s just how it happened, but I’ve always been proud to be Latina, Chicana, Mexican-American. You know, my “abuelitos” came from Jalisco, Mexico, with their clothes on their back and not a penny in their pocket, and if it weren’t for their sacrifice I wouldn’t be where I am today. So it gives me a lot of pride to be able to sing music completely in Spanish because I AM Latina and because I can look to my “abuelitos” and say: “Sí valió la pena”. It was worth it in the end.