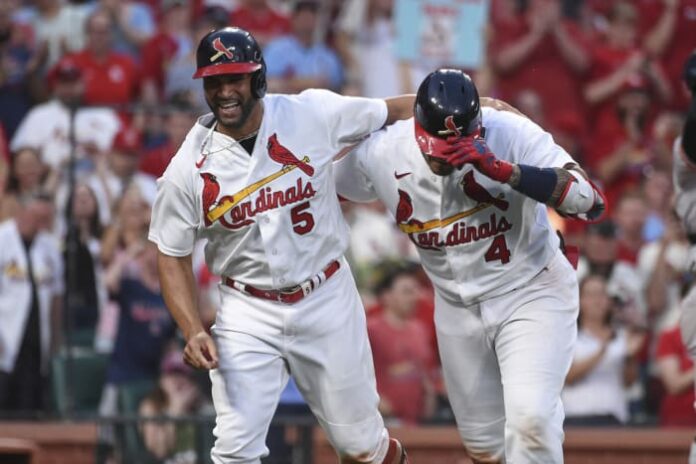 ST. LOUIS – Yadier Molina homered and drove in four runs and Adam Wainwright tossed six effective innings to lead the St. Louis Cardinals to a 15-6 win over the San Francisco Giants on Sunday night that ended with veteran slugger Albert Pujols on the mound.

Paul Goldschmidt and Nolan Arenado each added a two-run homer for the Cardinals, who took two of three in the series after losing two of three to Baltimore. Goldschmidt drove in three runs.

Pujols, the Cardinals’ designated hitter, came into the game as a pitcher for the first time in his career in the ninth inning. He gave up a three-run homer to Luis Gonzalez and a solo homer to Joey Bart but managed to get the final three outs.

Joc Pederson had a two-run homer for San Francisco, which lost its second in a row after winning six straight.

Molina capped a four-run outburst in the first inning off Carlos Rodon (4-2) with a two-run single. Molina added a two-run homer off reliver Zack Littell in the fifth to push the lead to 11-0.

Wainwright (4-3) gave up two runs and three hits. He struck out five and walked two. The right-hander retired 14 of the first 15 batters he faced. Gonzalez got the Giants’ first hit with a two-out single in the fifth.

Wainwright and Molina set a major league record with 203 wins by a starting battery. They passed Warren Spahn and Del Crandall, who amassed 202 wins for the Boston/Milwaukee Braves from 1949-63.

Rodon (4-2) allowed eight runs and 10 hits over 3 2/3 innings. He struck out three and walked one. He had given up just seven earned runs over his previous six starts this season.

Every St. Louis starter had a hit by the sixth inning.

St. Louis rookie outfielder Juan Yepez singled in the first inning. He has reached safely in each of his first 11 games, the longest streak by a Cardinals rookie since Luis Alicea reached in 23 successive games to begin his career in 1988.

The Cardinals went 0-4 in Sunday night games last year before winning in their first try this season.

Gonzalez came in from the outfield to pitch in the seventh with the bases loaded and two outs. He gave up a run-scoring single to Dylan Carlson before getting Harrison Bader to fly out.

San Francisco RHP Yunior Marte was recalled from Triple-A Sacramento and gave up two earned runs in 1 2/3 innings of relief. INF Donovan Walton was sent to Sacramento. Walton had one hit in four at-bats with the Giants.

Cardinals: RHP Alex Reyes has been shut down after experiencing more shoulder soreness. Reyes, sidelined all season, felt more discomfort while playing catch. He had an MRI last week and will remain inactive until the results are known. “Unsure if it’s the same area,” manager Oliver Marmol said. “But it is shoulder discomfort.”

Cardinals: RHP Miles Mikolas (3-1, 1.49) faces the Mets in the opener of a four-game set Monday night in New York — weather permitting. Mikolas has allowed two runs or fewer in all seven starts this season. The Mets had not annouced a starter yet.