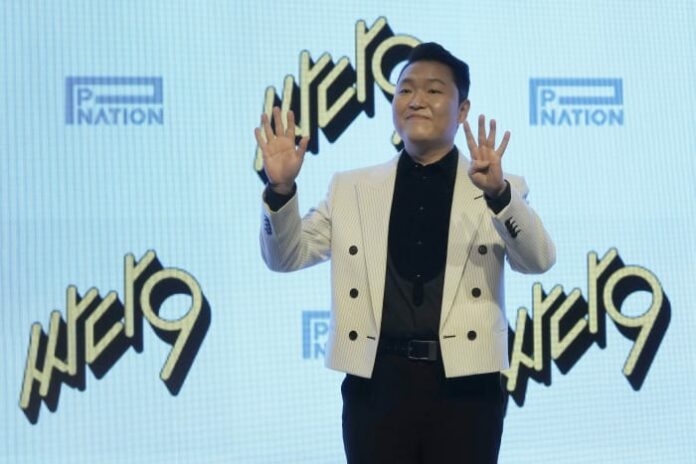 SEOUL – South Korean superstar PSY said his new album marks a “farewell to ‘Gangnam Style’” — the hit song that propelled him to superstardom exactly a decade ago.

Indeed, the music video for the lead single — “That That” featuring Suga from BTS – shows PSY in the famous blue suit he wore in the “Gangnam Style” video.

“So, a guy in a blue tuxedo comes out and gets a slap from Suga and goes on his way,” eluding to his old self walking away from the past, PSY told The Associated Press during an interview before the album’s release. His latest album “PSY 9th,” released Friday, has 12 songs, including one featuring Korean-Canadian rapper Tablo.

PSY, whose real name is Park Jae-sang, swept the world with “Gangnam Style” in 2012. The song, with its addictive horse-riding dance and catchy melodies, made a global splash and currently has over 4.4 billion views on YouTube.

In an interview, PSY discussed the long gap in recordings, whether he’s still pressured by the global success of “Gangnam Style,” and what he envisions for himself and the Korean pop industry.

Remarks have been edited for clarity and brevity.

PSY: One can’t satisfy everyone. People’s taste is subjective. But if I let someone listen to my music and even if that person isn’t from the industry, if that person says, “This is not that great,” I make a change. There are 40 to 50 people I play my music to when it’s ready. Until they collectively say, “This is the best it can get,” I search for the song. So… I also make a lot of changes. Our artists find this difficult when working with me, and I want to change the habit, but it’s hard to correct it. When I make music, I listen to it on a cellphone speaker, on a big speaker, and do my best to try to find a fault… I kill many songs, and I’ve been in that process for a long time.

PSY: Every artist in my company and some of our label employees. There are young and old people including my parents… The most random person is my best friend — someone my age living everyday life who has been continuously monitoring my songs ever since my first album.

PSY: The hidden theme of this music video is “Farewell to Gangnam Style.” So, a guy in a blue tuxedo comes out and gets a slap from Suga and goes on his way. There is a hidden theme in the song of me and Suga in new outfits sending old PSY off. It’s not a serious video but there is such a scene. But personally, and work wise, the success of “Gangnam Style” was a very big event so it’s impossible to not be conscious of it permanently. But at the same time, it’s been a long time, and right now I feel very free and easy. So instead of being conscious of it, I think of it as the biggest trophy on my shelf, nothing more or less. Right now, I’m just mesmerized by doing new music with new friends.

AP: So how long did it take you to get over “Gangnam Style?”

PSY: I couldn’t get over it at all for the 7th album. I was largely over it five years ago when I released my 8th album. Now, I am completely over it.

AP: What’s your favorite song in your music career?

PSY: There is a song called “It’s Art” in my 5th album. Whatever I write, it’d probably be difficult to beat that song.

PSY: Even though I’ve been doing music for a long time, there are some of my own songs that still make me proud. That’s the song. It’s emotional and has nice beats and messages, and the audience loves the song. I’d never promoted the song, but it went viral and became the song that I sing after “Champion” and “Gangnam Style” during concerts.

AP: If there were to be the biggest change in the Korean pop industry in the near future, what would that be?

PSY: K-pop will continuously level up in terms of the size of budget and efforts going in, and the standard of trainees… I think the next change will be metaverse… Metaverse will bring changes to the K-pop industry by getting rid of boundaries for stage and audience.

AP: Are you preparing any NFT or metaverse-related project?

PSY: It’s my first time revealing this. I am preparing a character of myself that sings and dances. Thankfully, people are used to an illustration of me because I’ve been using it as my album cover ever since my debut… But PSY as a singer should remain active offline for a long time. I am not known for a muscular body or well-trained dance moves. The audience gets thrilled by my vibe and atmosphere on stage, so an audience-free concert won’t be an option for me. But I am working closely with artists in my label to prepare for the metaverse world.