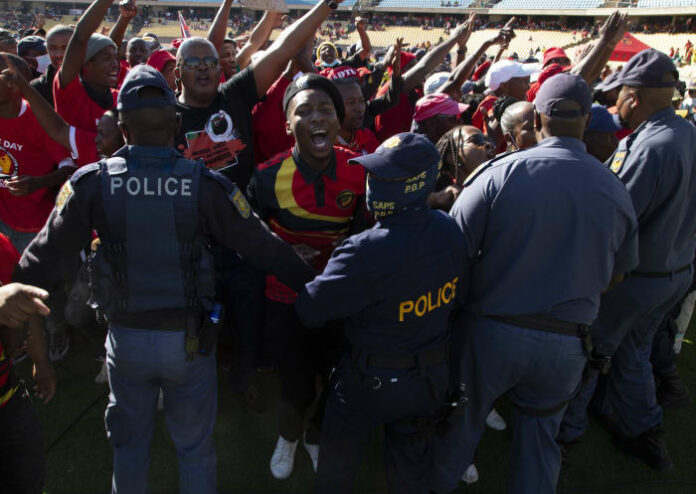 The workers employed by Sibanye-Stillwater mine are demanding a wage increase of 1,000 rand ($63) per month instead of the 850 rand ($54) being offered by the mine.

Ramaphosa had decided to mark the Workers Day, a public holiday in South Africa to mark May 1, by giving a speech to union members in Rustenburg, a mining center.

Ramaphosa was booed as he started his address with a call for the striking workers and other members of the Congress of South African Trade Unions to calm down and listen to what he had to say.

“We have heard that you want your 1,000 rand. We will deal with that matter,” Ramaphosa told the protesting workers.

Shortly after that Ramaphosa was forced to give up his speech altogether when angry miners stormed the field and overwhelmed police surrounding the stage at the Royal Bafokeng Stadium. Ramaphosa’s security guards whisked him away from the venue.

The striking workers have become even angrier in recent days over reports that Sibanye-Stillwater’s CEO, Neal Froneman, earned more than 300 million rand ($19 million) in 2021 in salary payments and company share schemes.

Rustenburg in North West Province is a tumultuous area for Ramaphosa and South Africa’s ruling African National Congress party. Many union members continue to blame them for the Marikana massacre, where 34 miners were shot dead by police during a strike at the Lonmin mine in 2012, when Ramaphosa was a non-executive director of Lonmin.

The tumultuous scene Sunday indicates the challenges that Ramaphosa faces later this year in his effort to be reelected head of the ANC as the unions are a key constituency of the party.