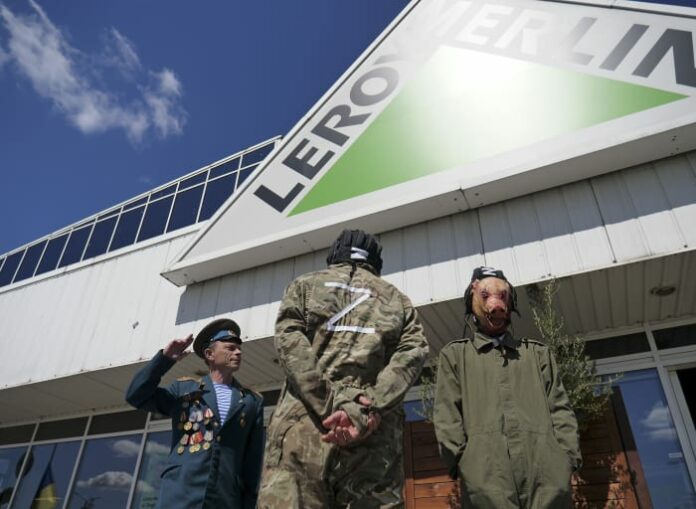 WARSAW – A man in a Russian military uniform stood at the entrance of a large home improvement store in Poland’s capital, saluting shoppers and thanking them for funding Russian President Vladimir Putin’s war in Ukraine.

His chest bedecked with medals, Polish activist Arkadiusz Szczurek was protesting at the French-owned retailer Leroy Merlin in Warsaw as shoppers flocked to buy plants and gardening equipment with spring’s arrival. Some shoppers turned around to go elsewhere. Others were indifferent or irritated.

“Millions of Ukrainians are forced to flee the bombs and shooting, (and) people are dying,” Ukrainian activist Natalia Panchenko said at the small rally last weekend. “But they keep doing business and see no problem with financing the war.”

It marked the latest protest in Poland over Leroy Merlin’s decision to keep operating 112 stores in Russia, even as many other Western companies have suspended operations there. Leroy Merlin wouldn’t comment other than to say it’s not responsible for the war. It’s among the foreign companies with a large footprint in Russia that have had to choose between taking the financial hit of leaving or face damage to their reputation by staying.

It is a painful choice for companies based in countries like France and Italy, which do extensive business in Russia and are keeping their sights on future trade once the war is over. However, many corporations with big stakes in Russia have pulled out and are enduring the hit to their bottom lines.

McDonald’s closed its 850 stores in Russia in March, but is still paying its 62,000 employees. The fast-food chain said it’s losing $55 million per month in sales from Russia and expects to lose $100 million worth of inventory because of store closures. Energy company Shell says it’s taking a $3.9 billion charge to cover the cost of exiting investments in Russia, while rival BP said it’s taking $25.5 billion in pretax charges to exit its holdings in Russian energy producer Rosneft.

Leroy Merlin, with stores similar to Home Depot, is among the foreign companies with the highest revenue in Russia. It says it has helped Ukrainian refugees, including its workers. Parent company Adeo Group in Paris didn’t reply to multiple requests for comment.

Such French companies with significant operations in Russia have been singled out by Ukrainian President Volodymyr Zelenskyy as aiding Russia’s war effort. In an address to the French parliament in March, he mentioned carmaker Renault, Leroy Merlin and two other retailers belonging to Adeo Group: supermarket chain Auchan and sporting goods chain Decathlon.

Soon after, Renault and Decathlon said they would suspend Russian operations, but Leroy Merlin and Auchan stayed.

To many in Ukraine, where Leroy Merlin shut its six stores amid bombings, that feels like a betrayal. In Poland, which borders Ukraine and has accepted more refugees than another other country, many people are highly critical of the French company.

Poland is a member of NATO, but there are still fears it also could become a target of the Kremlin’s revived colonial ambitions, particularly if Russia claims victory in Ukraine.

Dominik Gąsiorowski, top organizer of the Polish Leroy Merlin Boycott movement, believes withholding business to a company that’s a major taxpayer in Russia is one of the few concrete things regular people can do to influence the outcome of the war.

“If we, as Western nations, support businesses staying in Russia, we are paying Putin to invade us eventually,” he said. “I refuse to believe that my people, Polish people, cannot make such a small gesture of solidarity during a genocide as choosing another shop a few kilometers away.”

During last weekend’s picketing, activists held a poster of a container alongside Leroy Merlin’s green logo, calling it a “bin for a corpse” with the message “Leroy Kremlin supports the Russian invasion.”

It was designed by artist Bartłomiej Kiełbowicz, who also has created fake labels people have been sticking on shelves inside Leroy Merlin stores, including one for a broom and dustpan “for sweeping away guilt.” There is another for hammers — “for killing.”

Andrzej Kubisiak, deputy director of the Polish Economic Institute, said it’s too soon to know the full effect of the protests but that an app monitoring movement on streets has showed less traffic going to Leroy Merlin, Auchan and Decathlon stores. A Polish bank analysis of card payments also shows a fall in purchases.

But Kubisiak said historically boycott movements lose steam over time, and he expects this one will, too, as Poles, facing inflation of over 12%, will be guided by consumer prices above all else. All three French retailers are known for their competitive prices.

Polish shoppers’ reaction to the protests has been mixed.

“I would be hurting the French, and they are our friends,” he said, loading potted plants and large bags of soil into his car trunk. “Why would I do that?”

The activists also are encouraging people not to shop at Auchan. Gąsiorowski said the movement is focusing mostly on Leroy Merlin because it was the foreign company with the second-highest revenue in Russia in 2020, following cigarette maker Philip Morris International, which has suspended investments. Auchan was No. 6.

But the movement, he stresses, is larger than Leroy Merlin.

“Every other company is looking at them as an example,” he said. “If they succeed while collaborating with Putin, all the major players will return to Russia.”

Colleen Barry in Milan, Anne D’Innocenzio in New York, Dee-Ann Durbin in Detroit, and Kelvin Chan in London, contributed to this report.