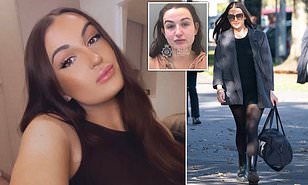 A prison nurse who was jailed for six months over ‘flirtatious’ calls with a ‘manipulative’ inmate is likely to be isolated behind bars for her own safety.

Elyse Hibbs, from Manchester, admitted misconduct in public office by having an ‘inappropriate relationship’ with the prisoner while working at HMP Parc in Bridgend.

The 25-year-old, who the court heard was ‘manipulated’ by the unnamed inmate and got in ‘too deep’, began sobbing as she was sentenced to six months in prison at Cardiff Crown Court.

Recorder of Cardiff Judge Tracey Lloyd-Clarke told Hibbs that despite her clear remorse, the offence was ‘too serious’ and warranted immediate custody.

Adam Sharp, defending, said Hibbs was ‘particularly vulnerable because of her age’ and argued that she should be given a suspended sentence.

‘A custodial sentence would be particularly difficult for her given her previous employment in that system,’ he told the court.

Hibbs met the prisoner while giving him medical treatment in her jail and he contacted her on Instagram.

Prosecutor Matthew Cobbe said jail chiefs suspected the inmate was involved in an inappropriate relationship with another worker at HMP Parc in Bridgend and so he was transferred 205 miles away to HMP Manchester.

But investigators then found Hibbs’ phone number on his approved calls list for inmates.

Mr Cobbe said: ‘Having been moved the inmate’s calls were monitored in HMP Manchester and it was quite plain the relationship with this defendant had was being nurtured by the inmate.

‘He contacted the defendant very many times and the bulk of it occurred when she was employed at HMP Parc.’

Mr Cobbe said the inmate used his mother and a friend to initiate contact with Hibbs after he searched for her on Instagram.

Mr Cobbe said Hibbs phoned the inmate’s friend who would hold ‘two phones together so that they could talk to each other’ in what was called a ‘three-way call’.

He said: ‘The calls between them were flirtatious. They talk about the prison, staff within the prison, he tells her that he loves her and she tells him he doesn’t know her to love her.

‘She joked about going to Manchester in two weeks and that she will visit him. He pressed her about seeing her when he was out.

‘He told her he wanted to thank her for how she had looked after him at Parc.’

The court heard Hibbs – who was employed by security firm G4S – believed the inmate was using a smuggled phone to contact her and feared she would lose her job.

Mr Cobbe said: ‘In a later call they talk about a time the inmate had an iPhone hidden in his bottom.’

‘He tells her that he loves her and she tells him that she loves him too. The calls included references to the defendant’s existing partner and the inmate continuously suggested he would replace him and be in a relationship with her.’

Cardiff Crown Court heard the two swapped messages on Instagram by contacting each other through an account held by the inmate’s friend.

Mr Cobbe said: ‘She told him she didn’t want him messaging her as she was anxious and that she didn’t trust him.’

Hibbs quit her post at HMP Parc in July 2021 and was arrested a week later and admitted exchanging messages with the prisoner.

She told police she was scared to end the contact after he had previously threatened her.

Mr Cobbe said: ‘She explained that she and the inmate were never in a sexual relationship of any kind at all.

‘She accepted she should have reported the matter but that she got in too deep and couldn’t get out.’

Hibbs, of Newbridge, Gwent, admitted misconduct in a public office.

Adam Sharp, defending, said the prisoner was known within the system to be a ‘particularly manipulative individual’.

He said: ‘She was young, impressionable, inexperienced and vulnerable to the malign influence of the inmate who sought to exploit her.’

Mr Sharp said Hibbs had ‘dedicated a significant part of her adult life’ to nursing but her conviction meant she would be banned from the profession.

Recorder of Cardiff Tracey Lloyd-Clarke, told Hibbs: ‘You knew what you were doing was wrong, you had training but nevertheless you went ahead and formed what was clearly an emotional relationship with this prisoner.

‘Although you were young you held a position of responsibility as a nurse and as a member of prison staff. You failed to report initial contact despite advice from a colleague and training you had had.