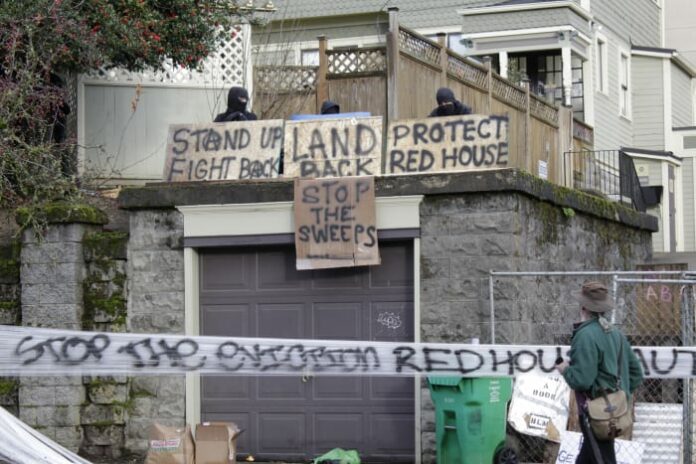 PORTLAND, Ore. – Growing discontent over homelessness and crime in Portland is driving interest in a pair of Oregon congressional primaries, one featuring a vulnerable incumbent endorsed by President Joe Biden and the other involving a candidate bankrolled by cryptocurrency.

Tuesday’s primaries for the 5th and 6th U.S. House districts are playing out in a state that’s become a right-wing target after sometimes-violent protests in Portland following George Floyd’s murder, surging gun crime and an ongoing homelessness crisis in the city.

The problems have given Republicans a megaphone and raised the stakes for Democrats as a crowded field of candidates vies to advance to November in a historically blue state, said John Horvick, political director at the nonpartisan public opinion firm DHM Research.

“Two of the districts touch on Portland, and Portland’s just become a rallying cry. It’s the biggest city, and it matters to the state’s economy, but it’s also a symbol for what is going wrong in the state right now,” Horvick said.

Another key race, for Oregon’s 4th Congressional District, is wide open for the first time in decades as Democratic U.S. Rep. Peter DeFazio retires after 35 years. Changes to that district’s boundaries, however, are expected to favor Democrats even more strongly.

In Oregon voting is done entirely by mail, and nonaffiliated and third-party voters together make up the largest group of voters. So far, turnout has been anemic, but that could change because voters have until election day to postmark their ballots.

Amid that backdrop, a newly created 6th Congressional District that includes some Portland suburbs is creating national buzz for the amount of money in play and has attracted 16 candidates, including a Democratic newcomer backed by a cryptocurrency kingpin. The state gained a district in a once-in-a-decade reapportionment after the 2020 U.S. Census.

The nine Democrats competing in the primary have spent more than $18 million combined and drawn more than $13 million in outside money to date, making the race one of the most costly among Democratic primaries nationwide, according to OpenSecrets, a nonpartisan research group that tracks money in politics.

Top among those is Carrick Flynn, whose ads have inundated local TV but who remains unfamiliar to many voters. Cryptocurrency billionaire Sam Bankman-Fried’s political action committee has poured millions into Flynn’s campaign, and the powerful House Majority PAC, which focuses on electing Democrats to the U.S. House, has spent $1 million in ads on his behalf.

Flynn appears to be in a close race with state Rep. Andrea Salinas, a three-term state lawmaker who would become Oregon’s first Hispanic woman in Congress if elected. Sen. Elizabeth Warren of Massachusetts endorsed Salinas this week, saying she would be a “progressive champion” for working families in the district, which is 20% Hispanic.

Seven Republicans are running for the 6th district seat, including Ron Noble, a moderate who currently serves in the Oregon House.

Meanwhile, the 5th district has been significantly redrawn, leaving centrist incumbent Democratic Rep. Kurt Schrader to defend himself from progressive candidate Jamie McLeod-Skinner, who has the backing of the local Democratic parties in all four counties covered by the seat.

The district, which once stretched to the Pacific Coast, now reaches east across the state’s political fault lines to include Bend — an area where Schrader has less name recognition. Biden recently endorsed the seven-term congressman for reelection in the district, which now leans a little less blue.

Schrader, a veterinarian and former state lawmaker, has alienated progressive members of his party over the course of his last term.

He was one of two House Democrats to vote against a $1.9 trillion pandemic relief package, in part because he didn’t want the bill to include an increase in the minimum wage. He also voted in committee against a Biden-supported plan that would have allowed Medicare to negotiate outpatient medication prices with pharmaceutical companies and has apologized for likening the pending impeachment of then-President Donald Trump over the Jan. 6 Capitol insurrection to a “lynching.”

“There’s been a lot of discontent with a lot of the votes the Congressman has made and there’s a perception that he’s not really true to the standards of the party,” said Judy Stiegler, a part-time instructor at Oregon State University-Cascades and a former state lawmaker.

But some primary voters who pay attention may be concerned that McLeod-Skinner, an attorney and former city planner, wouldn’t be as competitive in November, particularly given that issues like Portland’s crime and homelessness are on the minds of even more moderate Democrats. The nature of primary voters — older and more politically moderate — may also play in Schrader’s favor, she added.

Meanwhile, five Republicans are vying to advance to November’s general election in the 5th district.

Jimmy Crumpacker, a seventh-generation Oregonian who worked on Wall Street and now owns his own energy firm, and former Happy Valley Mayor Lori Chavez-DeRemer have emerged in the crowded field in the increasingly bitter campaign.

Crumpacker, who said in a tweet that he was running to “stop the dumpster fire that is ruining this state,” has tried to pin Chavez-DeRemer as pro-abortion rights and too liberal.

Chavez-DeRemer, meanwhile, has gotten a nod from the third-ranking Republican in the House, Rep. Elise Stefanik of New York, who called her a “proven conservative results-getter” in a recent endorsement.

The race for Oregon’s only House district held by the GOP, in rural eastern Oregon, has gotten little attention and changes to the district’s boundaries are widely expected to make it even more safely Republican.