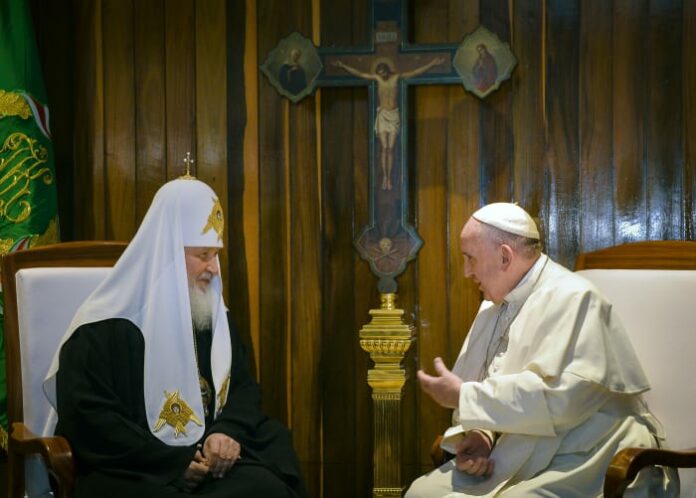 VATICAN CITY – His appeals for an Orthodox Easter truce in Ukraine went unheeded. His planned meeting with the head of the Russian Orthodox Church was canceled. A proposed visit to Moscow? Nyet. Even his attempt to showcase Russian-Ukrainian friendship fell flat.

Pope Francis hasn’t made much of a diplomatic mark in Russia’s war in Ukraine, seemingly unable to capitalize on his moral authority, soft power or direct line to Moscow to nudge an end to the bloodshed or at least a cease-fire.

Rather, Francis has found himself in the unusual position of having to explain his refusal to call out Russia or President Vladimir Putin by name — popes don’t do that, he said — and to defend his “very good” relations with the head of the Russian Orthodox Church, who has justified the war on spiritual grounds.

While the long list of dead ends would indicate a certain ineffectiveness, it is par for the course for the Vatican’s unique brand of diplomacy that straddles geopolitical realities with spiritual priorities, even when they conflict.

And in the case of Ukraine, they have: Francis has sought to be a pastor to his local flock in Ukraine, incessantly calling for peace, sending cardinals in with humanitarian aid and even reportedly proposing that a Vatican-flagged ship evacuate civilians from the besieged port of Mariupol.

But he has also kept alive the Holy See’s longer-term policy goal of healing relations with the Russian Orthodox Church, which split from Rome along with the rest of Orthodoxy over 1,000 years ago. Up until recently, Francis held out hope that he would secure a second meeting with Russian Patriarch Kirill, even while Moscow bombed Ukrainian civilians.

Francis recently revealed that their planned June meeting in Jerusalem had been called off, because Vatican diplomats thought it would send a “confusing” message. But he also told an Italian newspaper Tuesday that he had offered to go to Moscow to meet with Putin, and wondered aloud if NATO’s eastward expansion hadn’t provoked the war.

To his critics, Francis’ continued outreach to Moscow even amid reported atrocities harks back to the perceived silence of Pope Pius XII, criticized by some Jewish groups for failing to speak out sufficiently against the Holocaust. The Vatican insists Pius’ quiet diplomacy helped save lives.

“Francis is doing what he can, with the right priorities, to stop the war, stop people from suffering,” said Anne Leahy, who was Canada’s ambassador to the Holy See from 2008-12 and ambassador to Russia in the late 1990s.

“But he’s keeping channels of communication open in every way he can. Even if it doesn’t work, I think the idea is to keep trying,” she said.

Leahy noted that a pope must have as a top priority this Gospel-mandated objective to unify Christians, and that relations with the Orthodox therefore must remain at the forefront.

“Diplomacy is at the service of the church’s mission, and not the other way around,” she said in a telephone interview.

At times, Francis’ words and gestures seem contradictory: One day he sits down for a videoconference with Kirill that is prominently featured on the website of the Russian Orthodox Church with a statement saying both sides had expressed hope for a “just peace.” Three weeks later, he kisses a battered Ukrainian flag brought to him from Bucha, where Ukrainian civilians were found shot to death with their hands bound.

The Vatican has a long tradition of this dual-faceted diplomacy. During the Cold War, the policy of “Ostpolitik” meant that the Vatican kept up channels of communication with the same Communist governments that were persecuting the faithful on the ground, often to the dismay of the local church.

Francis’ decision to continue with the “classic Vatican diplomacy of Ostpolitik, of dialoguing with the enemy and not closing the door, is debatable,” said the Rev. Stefano Caprio, professor of church history at the Pontifical Oriental Institute.

“Those who are upset that the pope isn’t defending them more are right, but those from the diplomatic side who say ‘We can’t throw away these relations’ are also right. They are obviously in contradiction,” he said.

“But since we’re not talking about an argument of faith — we aren’t talking about the persons of the Holy Trinity — you can have opinions that differ from the pope,” he added.

In some ways, Francis’ role on the sidelines of the Ukraine conflict can be traced to his position when Russia annexed Ukraine’s Crimean Peninsula in 2014 and the Holy See appeared at least publicly neutral, despite appeals from Ukrainian Catholics for Francis to strongly condemn Moscow.

Instead, Francis described the ensuing conflict as the fruit of “fratricidal violence,” as if both sides were equally to blame and that the conflict was an internal Ukrainian matter.

“My experience in 2014 is that the existence of the Greek Catholics was seemingly an embarrassment and a frustration with the Holy Father and the Holy See,” said John McCarthy, who was Australia’s ambassador to the Vatican at the time. “Their priority was the relationship with the Russian Orthodox” and securing a meeting with Kirill.

Francis eventually obtained that long-sought meeting, embracing Kirill in a VIP room of the Havana, Cuba, airport on Feb. 12, 2016, in the first meeting between a pope with the Russian patriarch since the 1054 Schism.

The two men signed a joint statement that was hailed by the Holy See at the time as a breakthrough in ecumenical relations. But it enraged Ukraine’s Greek Catholics because, among other things, it referred to them as an “ecclesial community” as if they were a separate church not in communion with Rome, and didn’t mention Russia’s role in the separatist conflict in eastern Ukraine.

Fast forward to 2022, and Francis again upset the local Ukrainian church: The Vatican had proposed that a Ukrainian and Russian woman carry the cross together during the Vatican’s torchlit Good Friday procession at the Colosseum. The gesture, which preceded Francis’ unheeded Easter appeal for a truce, was an attempt to show the possibility of future Russian-Ukrainian reconciliation.

But the Ukrainian ambassador objected, and the head of Ukraine’s Greek Orthodox faithful, Archbishop Sviatoslav Shevchuk, decried the proposal as “inopportune and ambiguous,” since it didn’t take into consideration the fact that Russia had invaded Ukraine.

In the end, the Vatican compromised: The women carried the cross but instead of reading aloud a meditation that had called for reconciliation, stood together in silent prayer.

Leahy, the former Canadian ambassador, said the outcome was a classic example of papal pastoral care bridging Vatican diplomacy: Francis listened to Shevchuk’s complaint and modified the ritual, while keeping his broader agenda of dialogue with Russia alive.

Recalling the word “pontiff” derives from the Italian word for “bridge,” she said: “It’s the job of a diplomat, and certainly of a supreme pontiff who has the word ‘bridge’ written in his name, to keep the channels open.”

The Rev. Roberto Regoli, a professor of church history and an expert in papal diplomacy at the Pontifical Gregorian University, said those diplomatic channels with the Orthodox are important now, but also in the future when eventually Ukraine will have to be rebuilt.

“The reconstruction of a country … requires the involvement of all forces, even religious ones,” he said. “So keeping these channels open is useful for the present but even more for the future, because it will take decades to rebuild.”