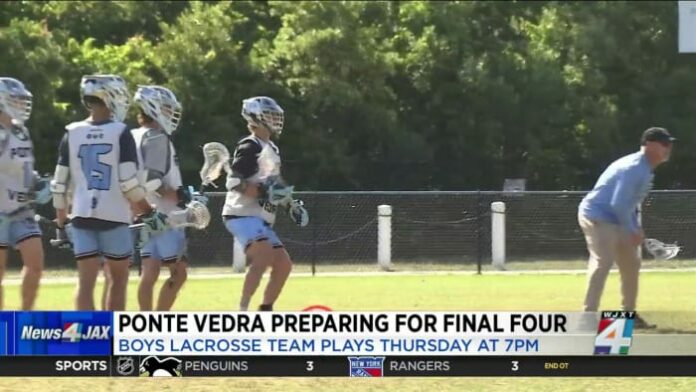 Lacrosse at the state level has been absolutely owned by private schools from south and central Florida. But one of the constants in that state series remain the Sharks (18-3), who face Winter Park (19-2) in the Class 2A state semifinals Thursday night at 7 in Naples.

A win would send Ponte Vedra into Saturday’s championship game against Tampa Plant or St. Thomas Aquinas. All four of those 2A programs are ranked in the top 28 in the nation by MaxPreps.

For the Sharks, there’s no secret of what’s expected this week.

A state title would deliver even more respect to the Sharks, who remain the only area boys team to win, or even play for, a state championship. Ponte Vedra is 254-37 all-time since its inaugural season in 2009. This final four trip is the program’s eighth.

Parlette said the expectation of success is instilled in every player on the roster.

“Just pass it down year to year, the culture once again,” he said. “Like it started off probably whenever the program started, I mean started with good culture with a bunch of hardworking boys. That’s just been passed down from class to class to class with good leadership.”

As superb as all of those totals are, it’s been extremely difficult for public school teams in lacrosse to get over the finish line in front of the private school behemoths.

Private schools have dominated the state lacrosse series, winning 11 of a possible 14 state championships since the sport was officially sanctioned in 2008. St. Andrew’s and Lake Highland Prep have combined to win nine of those and Aquinas the other two.

There are only two public schools to have won state titles (Jupiter has two and the Sharks have the other). Five of the eight teams in this week’s boys state semifinal round are private schools.

Ponte Vedra’s blueprint to prepare it for the rigors of the final two games has been to beef up its regular season schedule as much as possible so nothing is a surprise. Two of the Sharks’ three losses have come by a goal apiece to Plant and St. Andrew’s, both of whom remain alive. For first-year coach Chris Polanski, there’s another number that gets his attention, too.

“My favorite stat right now is we have 13 players on Division I rosters. Right now, that’s not like alumni, that’s currently on Division I rosters,” Polanski said. “And that’s double almost anyone in the state. We’re trying to make a name for ourselves similar to them [private schools like St. Andrew’s], you know. Our program has grown at the youth level all the way up to these guys.”

College players can cover one side of the spectrum, but there is a way to start changing that private school stranglehold on boys lacrosse. Ponte Vedra has been a consistent visitor come final four time, but the next goal is to start punctuating those trips with titles.

“We’re trying to treat it not like another weekend, but you know, just another game and kind of go through and do our same things,” Polanski said. “And you know, we’ve kind of preached all year, we just play our game. You know, we don’t really kind of bend a whole lot to the opponent. We want to just do our thing.”