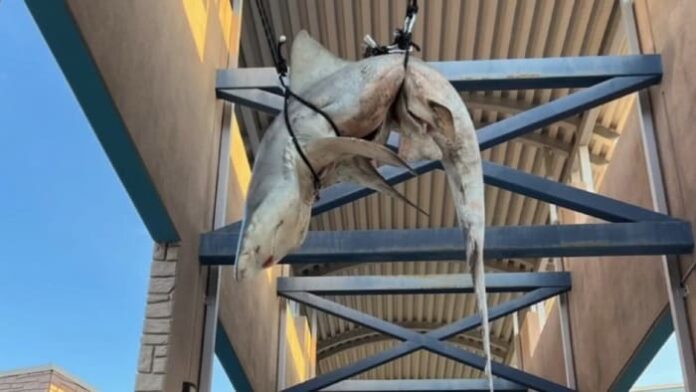 PONTE VEDRA BEACH, Fla. – A change.org petition started by an animal advocacy group is getting shared online that seeks signatures in support of seeking criminal charges against five students accused of hoisting a dead shark above a stairwell at Ponte Veda High School.

The shark was found Thursday morning, and pictures have been shared hundreds of times on social media. The St. Johns County Sheriff’s Office confirmed it’s believed to be a school prank and the Florida Fish and Wildlife Conservation Commission is leading the investigation.

How these students took a shark and hung it on the rafters is still a big question, and what’s going to happen to them for doing this — is unclear as well.

One person who commented on News4Jax.com says: “Using a dead shark or dead anything that used to breathe hanging at a high school is not a prank, it is sick.”

We spoke with Adam Suglaski, executive director of One Protest, an animal advocacy group, who said it’s hard to tell where they got the shark.

“I surf in Guana Park by Ponte Vedra. And there are bull sharks in the area they could have, you know, it is legal to catch a bull shark and take it. So it could have been caught legally, or they could have purchased it from fishermen off the dock,” Suglaski said.

He said he wasn’t surprised to see this. Suglaski has seen people catch sharks, drag them up to the beach, sit on them and post pictures.

The consequences these students face could be based on the kind of shark it was and if they are the ones who caught and killed it.

“Regardless of what species of shark it is, it’s still, like, it’s kind of upsetting to see that animal just being, you know, used as a prank,” Suglaski said.

The St. Johns County School District said the campus was locked and secured when this happened.

The school has surveillance footage that won’t be released, so it’s unclear when or if we’ll ever find out how they did this.