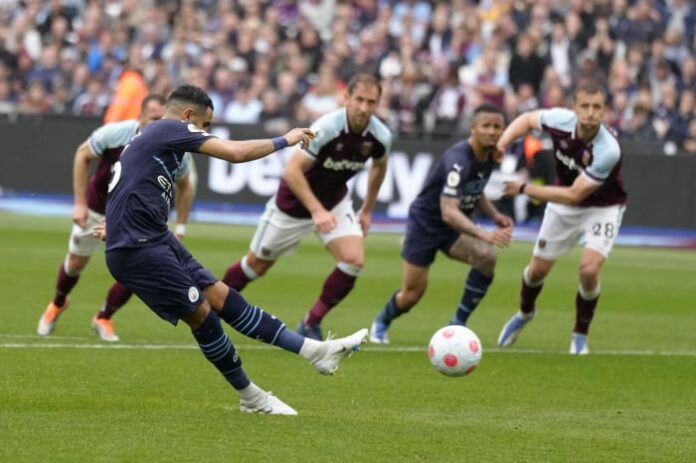 A dramatic penalty save might have kept the Premier League title race alive.

When Riyad Mahrez stepped up to take an 86th-minute spot kick for Manchester City, he knew that converting it would virtually secure another league championship for his team.

But it was saved by West Ham’s Lukasz Fabianski and City had to settle for a 2-2 draw at the Olympic Stadium on Sunday — albeit from 2-0 down — to leave Liverpool still with hope.

City is now four points clear of Liverpool, which heads to Southampton on Tuesday needing at least a point to take the title race to the final round next Sunday.

A win is probably required at Southampton, though, given City has a superior goal difference of 7 compared to Liverpool.

City finishes at home to Aston Villa, managed by Liverpool great Steven Gerrard, who was never able to win the league for Liverpool. He still could — but as a coach.

It’s just as tense at the other end of the standings.

Leeds scored in the second minute of stoppage time to salvage a 1-1 draw against Brighton and move out of the relegation zone at Burnley’s expense.

Burnley lost 1-0 at Tottenham a few hours earlier and lies in third-to-last place, one point behind Leeds.

Burnley does have two games remaining while Leeds has one.

Everton will be safe from relegation by beating Brentford later Sunday.