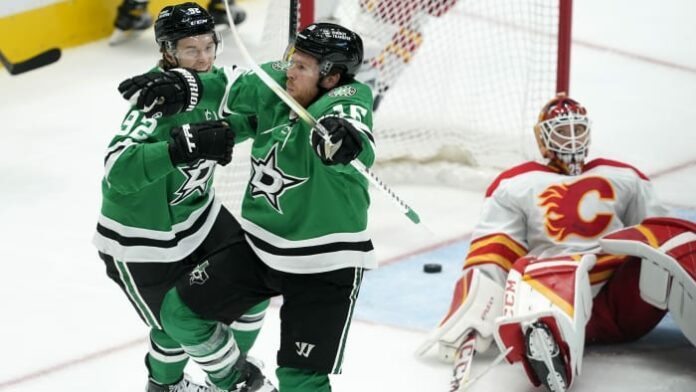 DALLAS – Joe Pavelski scored twice and got the game-winner on the first power-play goal in the series for Dallas as the Stars beat the Calgary Flames 4-2 on Saturday night to take a 2-1 lead in their first-round Western Conference playoff series.

The Stars were 0 for 10 with an extra skater, though one of those power plays had been for only 4 seconds earlier in Game 3, before Pavelski’s tiebreaking goal with 9:55 left made it 3-2.

Pavelski had made a cross-ice pass on a rush to Vladislav Namestnikov, who then took a shot that bounced of goalie Jacob Markstrom. The puck was knocked in by the 37-year-old Pavelski, whose 64 career postseason goals are the most by an American-born skater.

Jake Oettinger, the 23-year-old goalie for the Stars, had 39 saves in his first playoff game at home. It came two nights after his 29 saves in a 2-0 win at Calgary that evened the series.

Game 4 is Monday night in Dallas, before the series shifts back to Canada for Game 5 on Wednesday.

Radek Faksa scored the first goal for Dallas, and Roope Hintz added an empty-net tally just before the final horn. Miro Heiskanen had two assists for the Stars, who also finished with a 44-23 advantage in hits.

Elias Lindholm and Trevor Lewis had goals for Calgary.

After the teams traded shutouts and combined for only three goals in the two games at Calgary, they had another physical and brawling game. Matthew Tkachuk and John Klingberg fought only 1:22 into the game, trading blows and getting 5-minute majors as Oettinger made a glove save of Johnny Gaudreau’s wrister on Calgary’s first shot.

Pavelski’s first goal of the game tied the game at 2 about midway through the second period, when he knocked in Heiskanen’s shot that ricocheted off Markstrom. That came only seconds after Markstrom’s off-balance rejection of a shot by Heiskanen, though the Stars were able to keep the possession alive.

Faksa put the Stars up 1-0 about 8 1/2 minutes into the game when he used his stick to redirect Esa Lindell’s shot on a pass from Heiskanen right after a faceoff.

Just before that, Faksa was leveled in front of the net by Noah Hanifan before Markstrom was able to control the puck after a shot by Heiskanen.

Calgary got even at 1-1 on a goal that Stars coach Rick Bowness thought came because of goalie interference, with Oettinger laid on his side after contact with Milan Lucic. Dallas lost the replay challenge.

It appeared that Lucic, who was engaged with Tyler Seguin, tried to avoid the Dallas goalie. The contact happened just outside the crease and Lucic was able to push the puck back front, where it was knocked in by Lewis.

The Flames took a 2-1 lead when Lindholm scored from just inside the circle early in the second period.

Klingberg got a game misconduct at the end of the first period in Game 1 of the series, at the same time Tkachuk was in a fight with Michael Raffl. Klingberg also got a roughing penalty in Game 2, and added an unsportsmanlike conduct penalty later in Game 3. He has 26 penalty minutes in this series, after 34 penalty minutes in 74 regular-season games. … Oettinger had stopped 57 shots in a row over a span of nearly 129 minutes, ending the seventh-longest postseason scoreless streak ever by a Stars goalie. … There have been 45 penalties and 124 penalty minutes combined in the three games.