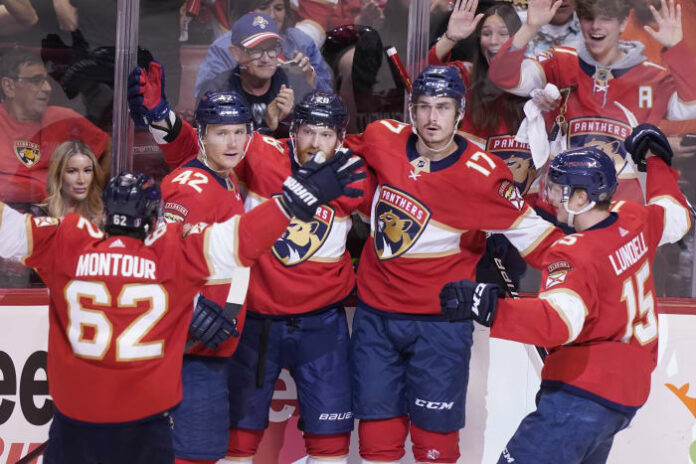 SUNRISE, Fla. – Aleksander Barkov and Carter Verhaeghe each had a goal and an assist and the Florida Panthers beat the Washington Capitals 5-1 on Thursday night to even the Eastern Conference first-round series at a game apiece.

Nicklas Backstrom scored for Washington. Vitek Vanecek gave up five goals on 18 shots in the first two periods, and Ilya Samsonov went into the Capitals’ net for the third period — stopping all 17 shots he faced in the final 20 minutes.

The series shifts to Washington, with Game 3 on Saturday and Game 4 on Monday night.

It was just Florida’s sixth win in its last 19 home playoff games going back to 1996, and matched the biggest victory margin in franchise playoff history. Florida beat Boston 6-2 in Game 2 of the first round of the 1996 playoffs, the season in which the Panthers went to the Stanley Cup final, and won 5-1 in Pittsburgh later that season in the East finals.

The Panthers were almost entirely bottled up for the first 14:30, getting held to two shots in that span — just the third time in 84 games this season that they were held to such a low number that deep into a game.

But the Panthers eventually got a break. Or rather, a bounce.

Ekblad opened the scoring with a shot that hit a Washington stick, took a big bounce off the ice and got past Vanecek. Barkov tapped in a pass that came through the crease from Jonathan Huberdeau shortly after, and it was 2-0 Florida after one.

Undeterred by a tough angle, Backstrom scored on a power play at 2:44 of the second to cut the lead in half, but Marchment restored the two-goal edge for Florida just 27 seconds later — the Panthers’ third goal of the night on just seven shots to that point.

Lundell got his goal by cashing in a give-and-go with Sam Reinhart, then Verhaeghe let fly with a wrist shot that got over Vanecek’s glove for the 5-1 lead.

That undoubtedly played a role in the Capitals giving Samsonov the third period, and just as undoubtedly brought back memories of last season when Washington used three goalies in six playoff games thanks to a combination of injuries and COVID-related issues.

The Capitals were without Tom Wilson, who left Game 1 shortly after scoring the opening goal of the series and did not return because of a lower-body injury. His status is listed as day-to-day by the Capitals, who recalled forward Brett Leason from Hershey of the AHL earlier Thursday. Leason made his NHL playoff debut.

Game 5 is now certain, and will be Wednesday night in Sunrise. … Florida made one change from Game 1 to Game 2, putting Noel Acciari in the lineup for Ryan Lomberg. Washington kept the same lineup, except for Wilson out and Leason in. … NHL Commissioner Gary Bettman was at the game, part of his postseason tour of playoff cities, and gave the start of the playoffs high marks after two years of COVID-related challenges. “Our buildings are full. You know, the words have been overused a lot lately — but ‘normal’ or ‘close to normal’ is feeling really good,” Bettman said.