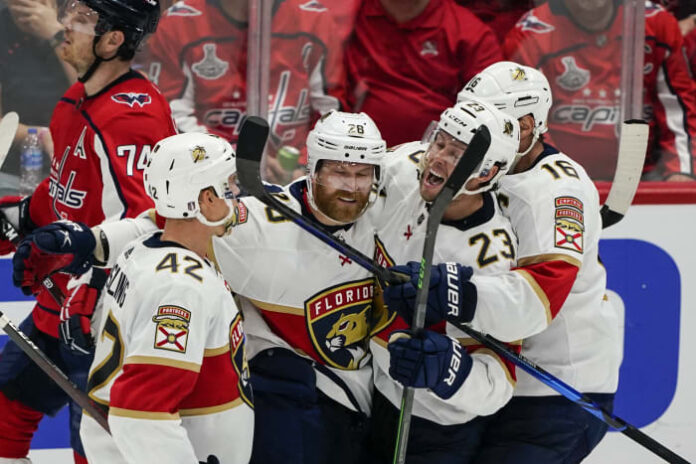 WASHINGTON – When the Florida Panthers faced their first real adversity of the season trailing their playoff series against the Washington Capitals, players held a meeting to set things straight.

They talked about what they needed to do better and got on the same page.

“After that, we just started playing the right way,” captain Aleksander Barkov said. “We held each other accountable, worked really hard for each other and for the guy next to you. That’s how you win.”

The Panthers won the franchise’s first playoff series since 1996 by relying on a familiar recipe from the regular season, when they were the NHL’s best team and led the league with 29 comeback victories. Each of their final three wins against Washington were in come-from-behind fashion, once erasing a three-goal deficit and twice getting some overtime heroics from Carter Verhaeghe.

Initial nerves at home early in the series faded when Florida started to feel the pressure. Then the Panthers started to look and play like themselves and moved on to face the winner of the series between the back-to-back Stanley Cup champion Tampa Bay Lightning and Toronto Maple Leafs.

“As the series went on, I felt they loosened up a little bit,” interim coach Andrew Brunette said. “They found their mojo and got going.”

That mojo provided the confidence the Panthers needed to withstand a tying goal by Washington’s T.J. Oshie with 1:03 left in Game 6 and a series-long 0 for 18 drought on the power play. They joined only a handful of teams in NHL playoff history to win a best-of-seven series without scoring a power-play goal but could still get a chuckle out of it in the aftermath of an emotional victory.

“We just got to stick with it and, obviously, maybe work on our power play because we haven’t scored a goal,” top winger Jonathan Huberdeau said.

No team scored as many goals as the Panthers during the regular season — a rate of 4.11 a game not seen since Mario Lemieux’s Pittsburgh Penguins. Florida didn’t have a team yet at that point.

Success came early in the organization’s existence with a trip to the Cup Final in its third season. After the Panthers were swept by the Colorado Avalanche, they hadn’t won a playoff series since and the reputation of losing in the first round latched on to the franchise and, particularly, cornerstone players Barkov, Huberdeau and defenseman Aaron Ekblad.

Verhaeghe was the team’s leading scorer with 12 points on six goals and six assists, but Florida’s core players were a big part of moving on and got a chance to soak it all in.

“We’re all happy and (it is) a big relief for us,” Huberdeau said. “Having this feeling, we didn’t know how it felt. The last time I felt that was junior. It’s just good to have that feeling again about winning a series, and now we just go to work and think about second round and, who knows, win this one as well.”

Newcomers played a major role, too. Trade-deadline acquisition Claude Giroux scored in the third period of Game 6 and set up Verhaeghe for the overtime winner, which was some level of redemption for the longtime Philadelphia Flyers captain after losing a key faceoff late in regulation when Washington tied it.

“When they tie it up, maybe some guys are down a little bit,” Giroux said. “I was probably one of them. But the mood was great. Guys were excited. Guys had a feeling that if we play our game we’re going to get our chances and we’ll be able to score.”

Even amid their power-play struggles, the Panthers showed they could score at 5-on-5 and got solid goaltending from Sergei Bobrovsky to keep playoff hockey going in South Florida. Even though his team had made good on the “Comeback Cats” nickname again, Brunette saw the series as more of what the Panthers did well all year.

“I see a group of guys that get hit and they don’t fall down and then they start hitting back,” he said. “To give up a late goal, those are heartbreaking moments. They could really affect you, it could kill momentum, it could do a bunch of things and again we took the punch, we stood up and then we started punching back. That epitomizes what the whole season was.”