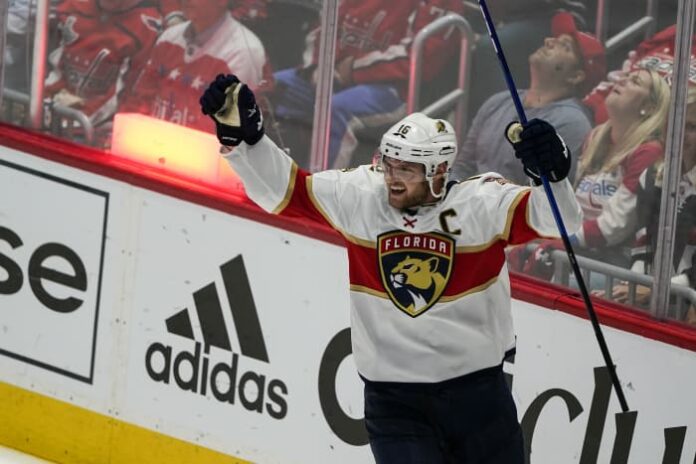 WASHINGTON – On the wrong side of a comeback effort this time, the Florida Panthers rebounded in overtime and made sure they wouldn’t need to go home to finish their first-round series.

Carter Verhaeghe scored the OT winner to send the Panthers to the second round by beating the Washington Capitals 4-3 in Game 6 Friday night. It’s the franchise’s first playoff series victory since 1996 when Florida reached the Stanley Cup Final.

The Panthers are still eight wins from getting back to the final, but they will have home-ice advantage for their next series against either the cross-state rival Tampa Bay Lightning or the Toronto Maple Leafs.

Florida looked to be on the verge of a regulation victory when Gustav Forsling tripped Nicklas Backstrom with 1:09 left in the third period. T.J. Oshie scored 6 seconds into the Washington power play to send the sellout crowd of over 18,000 into a frenzy.

Those fans were silent after Verhaeghe scored his sixth goal of the series 2:46 into overtime. Verhaeghe, Florida’s leading scorer in the series, missed the morning skate and was considered a game-time decision.

Trade-deadline acquisition Claude Giroux and captain Aleksander Barkov scored in the third period to put the Panthers ahead. Ryan Lomberg scored Florida’s first goal, tying it 2:29 after Nic Dowd got the Capitals on the board.

Lomberg scoring validated interim coach Andrew Brunette’s decision to insert him into the lineup in place of Anthony Duclair, who scored 31 goals during the regular season but had just one shot on goal so far in the series. The Panthers need offense wherever they can get it after again failing to score on the power play and extending their drought to 0 of 18 in the series.

Their most recent series win came June 1, 1996, when they beat Pittsburgh in Game 7 to advance to the final. The Panthers got swept by Colorado, starting what would begin a 26-year wait between series victories.

Other than the expansion Seattle Kraken, every other NHL franchise had won at least two series during that span. Detroit won 27, Pittsburgh 24, Tampa Bay 22 and Colorado won 20. Florida kept waiting and waiting for just one, until Friday.

The Capitals have not won a playoff series since hoisting the Cup in 2018 and got knocked out in the first round at home for the third time in that span.