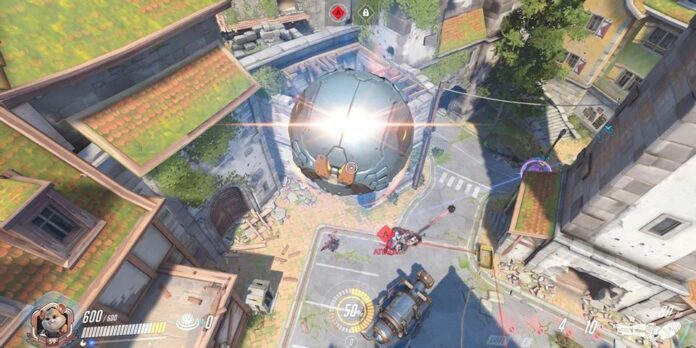 Wrecking Ball is a good character to play on the Overwatch map Eichenwalde, and this Wrecking Ball player found a good spot to hide on it.

In standard matches, Overwatch is a team-based shooter where the goal of the map is to accomplish a given objective. Some maps feature a point ot defend/attack, or to push the “payload” from one end of the map to the other. However, some players can lose sight of the objective in favor of getting more eliminations. Some Overwatch players use that to their advantage, like this particular Wrecking Ball player.

Wrecking Ball is a unique tank in Overwatch. His ability to use a grappling hook to swing himself around the map makes him a tricky target to pin down. Due to this ability, it can also be hard to predict where he will end up. His ability to head straight into the enemy team to cause chaos is unmatched in the game. This kind of behavior is also encouraged in his playstyle, since he has an ability that grants him more shields the more targets that are in proximity to him when he uses it.

Reddit user MaddleDee recently played a match as Baptiste, and they found themselves with a bit of an unexpected win. After losing a team fight, MaddleDee was walking back into the fight from spawn, and found that they had won the game. It turns out that their teammate that was playing Wrecking Ball had managed to make their way onto the chandelier on Eichenwalde and used it as cover to make a sneaky capture of the objective.

On the third point of the map Eichenwalde, the battles transition into a castle with hanging chandeliers above the corners where the payload has to turn around. The final chandelier hangs over the last capture point on the map where this Wrecking Ball player decided to hang out. Players can’t contest the objective while on top of the chandelier, but they can if they dangle from it. However, this Wrecking Ball player simply waited while the enemy team forgot to check on him, and once the enemy team left, he dropped and captured the point uncontested. MaddleDee almost blew the Wrecking Ball’s cover by trying to heal him, but the enemy team didn’t seem to notice. Eichenwalde is a fan favorite map in Overwatch, but it has its fair share of glitches.

It is nice to see some players still playing Overwatch, even while the Overwatch 2 beta is just a month away. Overwatch 2 promises to bring big changes to the hero shooter, including a reduction in team sizes, new heroes, and new maps with a new objective type.

Overwatch has a pretty dedicated fanbase for players to continue playing the game and posting clips months after the last drop of new content. The Overwatch community is anxiously awaiting the arrival of Overwatch 2, but it has still yet to be seen if the upcoming game will have the same level of popularity that the original enjoyed.