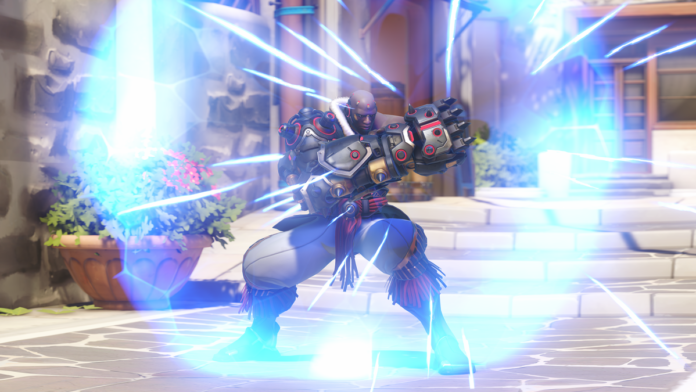 Yesterday, Blizzard revealed the reworks for Overwatch 2’s Doomfist and Orisa, with both seeing massive changes to their overall loadouts and focuses. They also act as a measuring stick for the sequel’s forward momentum and aggressive direction.

It’s been over two years since the last major content update released for the game, with its final hero, Echo, being added back in April 2020. On Tuesday, with the launch of the new Overwatch 2 beta, players are going to be greeted with the most meaningful and drastic changes to the franchise since it launched.

Character-wise, Sojourn is bound to be the most exciting addition as she is a whole new character. But Sombra, Bastion, Doomfist, and Orisa are seeing reworks that will make them feel almost like new additions. That’s doubly so for Doomfist and Orisa, who have seen the most drastic changes, as outlined in detail in an Overwatch blog post.

Perhaps most stark is Doomfist, who has moved from a DPS role to a tank. In a Tweet, Blizzard outlines the character’s differences:

Talk to the fist. All new weapon and ability kit for Doomfist coming to #Overwatch2. pic.twitter.com/toAXhvCqaJApril 20, 2022

By the sounds of it, Doomfist will be a more technical, yet risky choice. His abilities suggest that he’s all about going in on the enemy and trying to put himself into harm’s way, opening up opportunities that your team may capitalize upon. His main job will be jumping into the backline, taking the focus of the enemies, so your team can then push in and try to punish them as they avert their focus.

In a lot of ways, he seems very analogous to Winston, and to a lesser extent, Wrecking Ball. If you love those characters, it seems like he might be a great choice.

Personally, as a player who has a lot of time on Doomfist, thinking about him in terms of a tank is strange, however, also as someone whose favorite tank is Winston, this could be a perfect marriage. The riskier tank, that requires a mix of brains and technical skill to live is one of the game’s most fun tight-rope acts. Having that extend to Doom is fairly enticing.

Orisa on the other hand seems like something else entirely, and a largely unique kind of tank compared to others. Blizzard revealed her rework on Twitter, showing off a kit that is now focused around a lance.

Orisa online. All new weapon and ability kit for Orisa coming to #Overwatch2.Dive deeper into Doomfist and Orisa reworks in our latest blog.https://t.co/lFyJVeYP77 pic.twitter.com/9eG4kplA2mApril 20, 2022

This rework is very interesting, as it makes Orisa an active member of a brawl. She’s often been a powerful, but notoriously passive, and, dare I say it, boring tank to play. Her rotation is largely to place a shield down, then point and shoot at enemies. This new rework looks to have her on the front line as an active and serious threat.

Orisa sounds like, for want of a better word, a bully tank. She advances on the enemy team, and her Javelin Spin should allow her to push into the other team in a way few characters can. Mixing this with her returning Fortify ability, as well as her Terra Surge ultimate, she should be able to push other players around and shrug off huge amounts of damage. If a tank’s job is to make space, Orisa should excel at taking it.

Not too many characters act like this, but Reinhardt seems to be the most obvious counterpart. Orisa has projectile primaries and a skill shot, but they both withstand damage and push forward while doing so.

While these are big departures for both characters, and it might be a little worrying for those that main them, this push to make something new is a really positive sign from Blizzard’s Team 4.

While Overwatch’s meta has fluctuated and changed due to balancing patches, the game has remained functionally the same for two years. The fact it has any players left at all is a testament to the community, but it has been a long slog. Now, finally, Tuesday is the big day.

These Doomfist and Orisa reworks are a very promising look into how the development team is approaching the game. With the move to 5 vs. 5 matches, it’s clear Blizzard is making tanks far more aggressive and disruptive, acting like a big, bad boss of the team. While tank is a thankless role in Overwatch, being able to push around other players and sustain yourself while also giving other roles pop-off potential – it’s quite enticing. That is something tanks haven’t felt like in a long time.

Overwatch 2 is looking like it is going to be a much more furious iteration of the game players have known and loved for over six years. That feels like a much-needed shot of adrenaline after such a long period of stagnation.