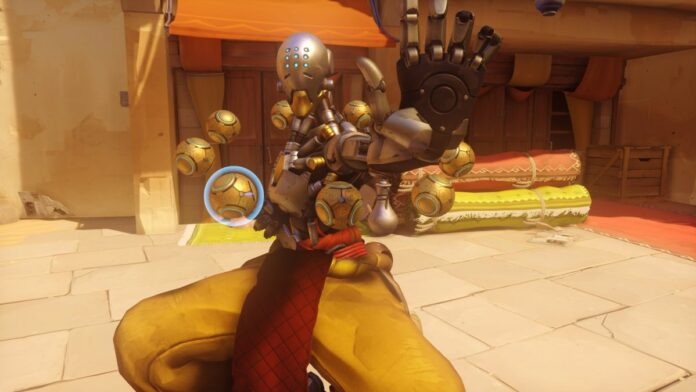 Blizzard has released a new patch for the Overwatch 2 beta, nerfing strong characters and buffing weaker ones. On top of that, Zenyatta has gotten a new, experimental ability.

In the patch, which is now live, a multitude of changes and fixes have been made to try and shake up the current Overwatch 2 beta. The most drastic change is almost certainly coming to Zenyatta, who is getting a whole new ability.

He now has a new passive, which should make him a little harder to get close to, giving him much-needed survivability. His new passive, ‘Snap Kick’, increases his melee damage by 50% and significantly increases its knockback. This allows him to get enemies out of his face, and a more powerful melee makes him particularly dangerous to dive characters like Tracer who will now fear getting too close.

In the patch notes, the developers explained: “Zenyatta has trouble fighting at close range, so he was at a disadvantage if an enemy flanked or jumped on top of him. His new passive, Snap Kick, will help him create space and put enemies at his fighting range.”

“We think this new passive will be a fun adjustment to his kit, but we also want this change to acknowledge community concerns. We understand 5v5 has made support heroes feel more vulnerable, and we wanted to give Zenyatta tools to help create space between him and enemies.”

On top of this, Zenyatta’s base shields are increased from 150 to 175 to give him more health.

Elsewhere, Wrecking Ball is returning from a short stint out of Overwatch 2 due to his ability to kick out every other player in the game. On top of that, he returns with a buff, increasing his knockback by 36% which should allow him to displace the enemy team more.

Soldier 76, arguably the best Damage hero in the game, is seeing pretty big nerfs, too, in an effort to bring him back in line with the rest of the roster. His bullets now do 18 damage rather than 20 and his Sprint has seen a 10% speed decrease.

He has gotten a little help in the form of buffs to his Ultimate, however. Tactical Visor now allows for critical hits and no longer removes damage falloff from his Heavy Pulse Rifle.

There are also quality of life changes, such as fixes to the kill feed not showing the correct information or health packs missing timers.

While this is just a balancing patch for the beta, it’s exciting to see a patch just a week after the beta’s launch. Blizzard’s cadence of communications and action thus far is encouraging, especially with two years of near radio silence just past us. If this level of engagement continues, players will certainly feel their concerns are being heard.

Fixed a bug where health packs would sometimes be missing timers

Made several adjustments to sound volume and mix

Fixed a bug where Wrecking Ball could crash other players

Fixed a bug where Sonic Amplifier could jam and not reload

Adjusted some geometry that could be abused by players

Cooldown reduced from 7 to 6 seconds

We saw a lot of players at varying skill levels struggling to land shots with her Alt Fire, so we are making the projectile width wider.

Sojourn is all about mobility, and we wanted her to move around the maps more freely. We think this will help increase her effectiveness and make her even more fun to play.

Movement speed reduced from 50 to 40%

Now allows for critical hits, if a shot would have been a critical hit without it running

No longer removes damage falloff from his Heavy Pulse Rifle

We believe Soldier 76 was over tuned during the first week of the PvP beta. He was extremely mobile with the new damage passive that increases movement speed by 10%. We brought his Sprint ability down a bit with the new passive in mind.

Soldier 76 has always been a high damage output hero, but we are seeing fewer counters to him with one less tank per team. We lowered the damage of his Heavy Pulse Rifle to fit with 5v5.

We wanted to make Tactical Visor a more interesting ultimate for players who want to push their aim skills through the ability. The point of this change isn’t purely to buff him or counterbalance the nerfs. We wanted to make Soldier 76 more fun to play while rewarding mechanical skill.

Movement speed reduced from 65 to 50%

After a week of testing the new damage passive, we decided to balance Sombra’s Stealth speed with the 10% movement speed increase in mind.

This ability has changed from a ‘Channeled’ ultimate (e.g. Pharah, Reaper, Cassidy), into a ‘Transform’ ultimate (e.g. Soldier: 76, Genji, Winston). This is what that means:

The weapon no longer automatically fires, and you must press Primary Fire to use the ultimate

Stuns will no longer cancel the ultimate

We saw Roadhog underperforming, so we are making his ultimate more interesting, effective, and fun. Roadhog was dying frequently while using Whole Hog, so we are trying to give him more options and flexibility in his ult.

This change to Winston’s secondary fire enables him to use it more often without sacrificing as much of his primary fire. We want his secondary fire to feel less restrictive to use and more fluid like his kit.

We are reverting Roll’s knockback to the original value from when Wrecking Ball was launched. We wanted to give Wrecking Ball a more unique role as a dive tank that can split up enemy teams. We made this change with the Tank passive of 30% knockback resistance in mind.

Duration reduced from 4 to 3.5 seconds

There are less counters to Graviton Surge with one less tank per team and phase effects no longer escaping Zarya’s ultimate. We observed the ultimate over-performing, so this change brings it in line with 5v5 gameplay.

Self-healing penalty increased from 30% to 60%

Lucio had incredible survivability with Crossfade stacked with the new support role passive, so we reduced the amount it heals himself.

Healing ammo increased from 10 to 13

Baptist is under-performing because teams aren’t playing as grouped up right now. Increasing his healing ammo will let him heal more targets who aren’t necessarily grouped up.

Duration reduced from 4 to 3 seconds

Ana’s Biotic Grenade was too effective with one less tank and more infrequent barriers, so we are reducing the duration of the ability. We also saw Ana using her grenade less frequently on herself because of the new support passive ability. To help compensate for her grenade, we wanted to give her power back through increasing her Biotic Rifle’s ammo.

Zenyatta has trouble fighting at close range, so he was at a disadvantage if an enemy flanked or jumped on top of him. His new passive, Snap Kick, will help him create space and put enemies at his fighting range.

We think this new passive will be a fun adjustment to his kit, but we also want this change to acknowledge community concerns. We understand 5v5 has made support heroes feel more vulnerable, and we wanted to give Zenyatta tools to help create space between him and enemies.

It’s difficult to tell when Brigitte lands a Shield Bash because the impact of that ability was not easily noticeable. This is a subtle change that will make the ability feel more satisfying.