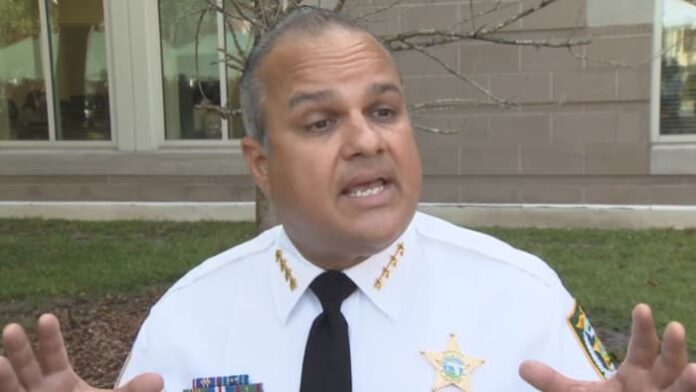 OSCEOLA COUNTY, Fla. – Osceola County’s sheriff is continuing to not answer direct questions about why his deputies opened fire on four men outside a Target store on April 27.

The shooting is believed to be connected to an incident involving Michael Gomez and Joseph Lowe, who were arrested that same night after deputies said they stole pizza and Pokémon cards from the Target before getting into a black Audi.

The affidavit said that’s when deputies tried to make contact, which ultimately led to two deputies opening fire, killing a man who a family attorney identified as 20-year-old Jayden Baez and injuring three others.

After an event Wednesday, Sheriff Marcos Lopez was asked why the deputies felt the need to use deadly force.

“Let’s do this, I’ll make one little statement.  When I first took office, I promised transparency,” Lopez said. “I turn it over to the Florida Department of Law Enforcement so they could do their investigation.  Once that investigation is concluded, then we’ll talk about it.  We’ll have all the facts, and we’ll go forward from there.  That’s all I’m stating.”

Other law enforcement agencies across the state have routinely provided information within hours or days of a deadly encounter involving an officer.

Lopez was pressed on the issue but continued to refer the case to the FDLE.

“This is how we do our investigations.  It’s the right thing to do by turning it over to a separate entity.  Let them do their job and as soon as it comes out, whatever the outcome is, then we can finally start talking about it.  People have to respect that,” Lopez said.  “We’re not another department.  We’re the Osceola County Sheriff’s Office, totally different, okay?”

Lopez’s comments came the same day plans were announced to file a lawsuit against the Osceola County Sheriff’s Office.

The Nejame Law Firm represents the four men involved in the encounter.

In a statement, the law firm called the shooting a grotesque misuse of police authority and use of unnecessary and excessive force.