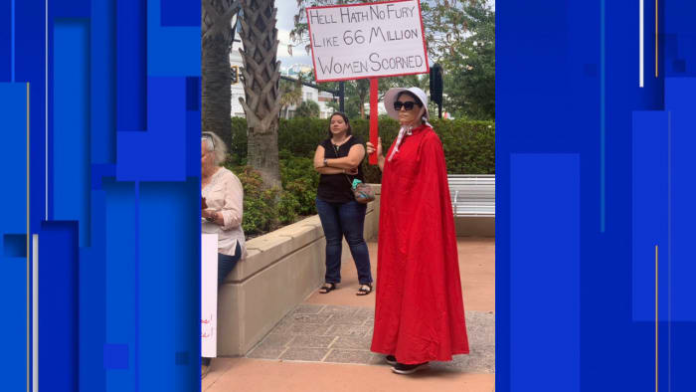 The large crowd wanted to make their voices heard after a U.S. Supreme Court draft opinion leaked, suggesting the court will overturn Roe V. Wade — a landmark decision made in 1973 establishing the right to an abortion.

The group exuded anger and frustration but hoped expressing their opinions could make a difference.

“The leaked draft decision is wrong and will harm millions of people,” one speaker said. “We should all be able to make the personal health care decisions that impact our lives, health and futures.”

“I had an abortion at a hospital in Brooklyn at 20 weeks and I gave birth to a dead fetus, but you know what? That’s better emotionally for me than what I would have had to do if I was forced to keep that pregnancy,” another speaker said.

“These are deeply personal decisions that should be left between a woman, her doctor, her family and her fate, and politicians should stay the hell out of it,” Smith said.

Samantha Sear, an Orlando resident, said she attended the protest to express her opinion.

She called the draft opinion “awful,” but she is happy the public now knows the court’s intentions. Sear hopes that her voice — along with the others opposing abortion bans — can stop Roe v. Wade from being overturned.

“No woman can call herself free who does not have control over her own body,” Sear said.

The group also said they believe abortion is more than an operation.

“Let us be clear, abortion is health care,” a speaker said.

The draft opinion was signed by Justice Samuel Alito, but no final decision has been made.