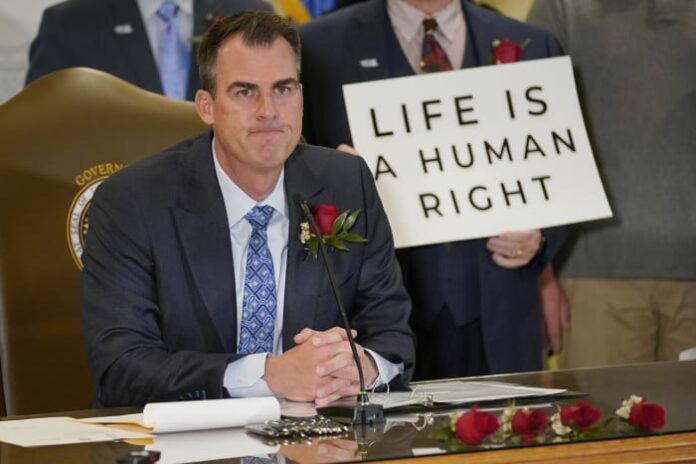 OKLAHOMA CITY – Oklahoma joined Texas this week to form a region that may look like what a nation divided over abortion care might look like if the U.S. Supreme Court strikes down its landmark Roe v. Wade ruling.

While abortion providers across the country have been bracing for the possibility that the high court’s new conservative majority might further restrict abortion, that has especially been the case in Oklahoma, where lawmakers have passed a half-dozen anti-abortion measures this year.

A bill signed into law on Tuesday by Republican Gov. Kevin Stitt is similar to the law passed in Texas last year that led to a marked increase in women going to neighboring states, including Oklahoma, to get abortions. It prohibits doctors from performing an abortion after fetal activity is detected in the embryo, which experts say is typically after about six weeks and before many women even know they are pregnant. And like Texas’ law, it is enforced through civil, not criminal, courts and relies on civilians to inform on one another.

Abortion providers in Oklahoma said they are prepared for the law to take effect and have been helping women get appointments at clinics in neighboring states.

“I think something we realized in September (when the Texas law took effect) is that we are already living in a virtual post-Roe world in our region,” said Dr. Iman Alsaden, the medical director of Planned Parenthood Great Plains, which operates clinics in Arkansas, Kansas, Missouri and Oklahoma.

“We have seen people go to extreme lengths to access abortion care: driving all night, doing whatever they can to get the basic health care they need for them and their families. We have been seeing what a post-Roe future looks like in this region of the country already, and it’s unbelievable.”

The Oklahoma Supreme Court declined to temporarily stop the law from taking effect, although the court is still considering a legal challenge.

Stitt’s signing of the bill, along with the leaked draft opinion suggesting the U.S. Supreme Court is considering weakening or overturning its Roe v. Wade decision, led more than 100 people to protest on Tuesday at the Oklahoma Capitol.

“I honestly and truly never thought we would actually get here,” said Sophia Fults, 22, a University of Oklahoma student from Tulsa who held a sign that read: “Keep abortion safe, legal and accessible.”

“Honestly, I was just shocked and I’m still kind of shocked and disgusted. So many women are going to be harmed because of this. It’s just horrendous.”

The new law authorizes abortions if they are performed as the result of a medical emergency, but there are no exceptions for if the pregnancy is the result of rape or incest.

Like the Texas law, the Oklahoma bill would allow private citizens to sue abortion providers or anyone who helps a woman obtain an abortion. After the U.S. Supreme Court allowed that mechanism to remain in place, other Republican-led states sought to copy Texas’ ban. Idaho’s governor signed the first copycat measure in March, although it has been temporarily blocked by the state’s Supreme Court.

Stitt earlier this year signed a bill to make performing an abortion a felony in Oklahoma, but that measure is not set to take effect until this summer, and legal experts say it’s likely to be blocked because Roe still remains the law of the land.

“One of our main responsibilities in government is to protect life, and that has been our deliberate intention,” said state Sen. Nathan Dahm, a Republican who wrote the bill to make abortion illegal. “I believe here in Oklahoma we’ll do everything we can to protect life from conception.”

The number of abortions performed each year in Oklahoma, which has four abortion clinics, has declined steadily over the last two decades, from more than 6,200 in 2002 to 3,737 in 2020, which were the fewest in more than 20 years, according to data from the Oklahoma State Department of Health. In 2020, before the Texas law was passed, about 9% of the abortions performed in Oklahoma involved women from Texas.

Before the Texas ban took effect on Sept. 1, about 40 women from Texas had abortions performed in Oklahoma each month, the data shows. That number jumped to 222 in September and 243 in October, according to the most recent data available.

Clinic operators in Texas saw about a 40% decrease in the number of abortions performed there after the law took effect, and Oklahoma operators say they expect similar declines, said Zachary Gingrich-Gaylord, a spokesman for Trust Women, which operates clinics in Oklahoma City and Wichita, Kansas.

“In Texas, we’ve seen that many clinics were able to retain around 60% of their pre-SB 8 patient volume, and it seems reasonable to expect something similar in Oklahoma,” Gingrich-Gaylord said, referring to the Texas law by its state Senate bill name. “The primary reason to think that we may see far less volume than that is the chilling effect caused by the (Supreme Court) leak that may add to confusion for patients seeking abortions.”

According to state health department data, about 47% of abortions performed in Oklahoma in 2020 were for women who were less than six weeks pregnant.