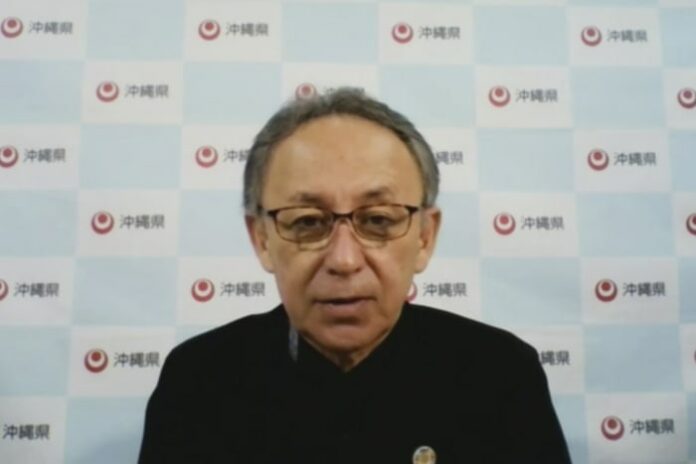 TOKYO – Japan should do more for peaceful diplomacy with China and not just focus on arms deterrence as tensions rise around Taiwan to the west of Okinawa, said the southern island prefecture’s governor Friday, demanding further reduction of its security burden and its risk hosting U.S. military there.

“We are strongly alarmed,” Okinawa Gov. Denny Tamaki said, by discussions at parliament about a potential Taiwan emergency — particularly on the premise that Okinawa would be embroiled because of its relative closeness 600 kilometers (370 miles) east of Taiwan across the East China Sea.

Tamaki was speaking online from the prefectural capital of Naha ahead Okinawa’s 50th anniversary of its reversion to Japan on May 15, which came 20 years after most of Japan regained independence from the post-war U.S. occupation of 1945-1952.

Instead of celebratory mood, there is concern on Okinawa, with its heavy burden of hosting American troops amid escalating tension in the region over China’s increasingly assertive military actions and rivalry with the United States. There is also concern that Russian invasion of Ukraine may embolden China.

In what it calls a warning to Taiwan independence supporters and their foreign allies, China has been staging threatening exercises and flying military planes near the island’s airspace, including on Feb. 24, the day Russia began its invasion of Ukraine.

Despite that, Chinese officials including leader Xi Jinping say they are committed to using peaceful means to bring Taiwan under Beijing’s control.

The U.S. has consistently expressed its support for ensuring that Taiwan can defend itself, and Chinese military action against the island in the short- to medium-term is generally considered a remote possibility.

But the ongoing tension has rekindled fears among Okinawans that they may be sacrificed again by mainland Japan, as in the Battle of Okinawa that killed some 200,000 people, half of them local civilians.

“Any escalation of problems over the Taiwan Strait and the contingency of Okinawa being a target of attack must never happen or be allowed to happen,” Tamaki said.

Noting that China is Japan’s biggest trade partner and Japan being China’s second-largest, Tamaki said their close economic ties would be indispensable.

“I call for the Japanese government to always maintain calm and peaceful diplomacy and dialogue to improve its relations with China, while working toward easing U.S.-China tension,” he said.

Okinawa at the time of reversion asked Japan to make it a peaceful island free of military bases. Today, it is still burdened with the majority of about 50,000 U.S. troops and their military facilities in Japan under the bilateral security treaty.

Because of the concentration of U.S. military, Okinawa is faced with noise, pollution, aircraft accidents and crime related to American troops and their bases on daily basis, Tamaki said.

In addition to those “visible problems,” he said, “there are also the problems hindering economic development of Okinawa and structural problems. That excessive U.S. base burden is still unresolved 50 years after the reversion.”

Tamaki urged the government effort to raise awareness of Okinawa’s overburden of security that he says should be shared by all of Japan.

Okinawa called on Tokyo and Washington last year to gradually halve U.S. military presence on Okinawa, speed up the removal of the Futenma air station from a crowded neighborhood and abandon the ongoing construction of runways at Henoko on the eastern coast, he said.

“Okinawa’s burden of the U.S. military bases is a key diplomatic and security issue that concerns all Japanese people. We need to return to the basic principle of sharing the burden throughout Japan,” he added.

The biggest sticking point between Okinawa and Tokyo is the central government’s insistence on the relocation of Futenma to Henoko.

Japan’s central government says the Henoko plan is the only feasible plan and has been forcing it forward despite yearslong rejection by Okinawan people.

While Okinawa’s development projects over the past five decades have helped the the economy, the average Okinawan’s income has remained the lowest among 47 Japanese prefectures, Tamaki said.

If lands taken by the U.S. military are returned to the prefecture for economic use, it would triple Okinawa’s U.S. military-related income, Tamaki said.

Japan considers China’s military rise as a regional threat and has increasingly shifted its troops to defend southwestern remote islands, including Okinawa and its outer islands, deploying missile defense systems and other facilities, while increasing joint drills with U.S. military and other regional partners.