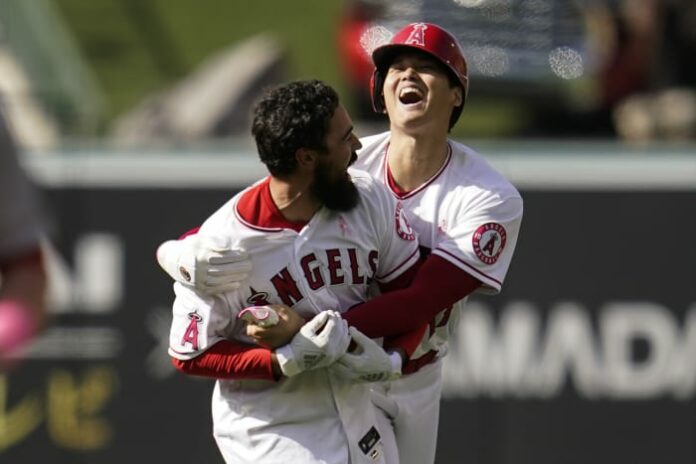 The Angels trailed 4-2 going into the ninth. Luis Rengifo drew a walk with one out and advanced to third on Taylor Ward’s hit. Mike Trout struck out, then Ohtani lined a two-run double to center off Tanner Rainey (0-1). The reigning AL MVP had been 1 for 11 against Washington during the weekend series.

Rendon then lined a single to center and Ohtani slid to avoid Victor Robles’ throw home to give the Halos the weekend series.

Rendon had two hits to sink a team he spent seven seasons with and won a World Series title for in 2019. Jack Mayfield also drove in two runs for the Angels. Jaime Barria (1-0) got the win.

César Hernández had three hits and Erick Fedde had his second straight strong start for the Nationals, who went 4-5 on their nine-game trip out West.

Alcides Escobar added two hits and drove in a run.

All 11 of the Nationals’ hits were singles. It is the first time since 2004, when they were the Montreal Expos, that they have had at least 11 hits with none going for extra bases.

Fedde allowed only two hits in five innings with five walks and four strikeouts. The right-hander went a season-high seven innings on May 3 at Colorado and has allowed only one earned run in his last 12 innings pitched.

Washington opened the scoring in the third. Riley Adams drew a walk, and hits by Escobar and Hernández loaded the bases with one out. Riley scored on a slow grounder by Juan Soto up the middle that had a chance for a single, but Angels shortstop Andrew Velazquez made a diving stop and made a throw behind his back to get Hernández out at second.

The Nationals extended their lead to 3-0 in the sixth when Lane Thomas’ sacrifice fly brought home Nelson Cruz and Escobar’s base hit up the middle drove in Maikel Franco.

The Angels responded with two runs in the home half. Jared Walsh led off with a single and Max Stassi drew a walk. The runners advanced on Brandon Marsh’s sacrifice bunt before Mayfield came on as a pinch-hitter and laced a one-out single to right to score both.

Mayfield’s hit snapped an 0-for-11 skid.

The Nationals tacked on a run in the seventh on an RBI single by Josh Bell before the Angels rallied.

Angels: INFs David Fletcher (left hip strain) and Jose Rojas (undisclosed) were placed on the injured list. INF Luis Rengifo was recalled from Triple-A Salt Lake and the contract of OF Aaron Whitefield was selected from Double-A Rocket City.

Juan Lagares signed a minor-league deal with the Angels and has been assigned to Triple-A Salt Lake. Lagares had a .236 batting average in 112 games last season and gives the Halos an outfielder who can play all three positions. Before joining the Angels last season, Lagares played eight seasons for the Mets and won a Gold Glove in 2014.

Nationals: Begin a six-game homestand against the New York Mets on Tuesday. LHP Patrick Corbin (0-5, 7.16) is 5-8 in 20 career starts against the Mets.