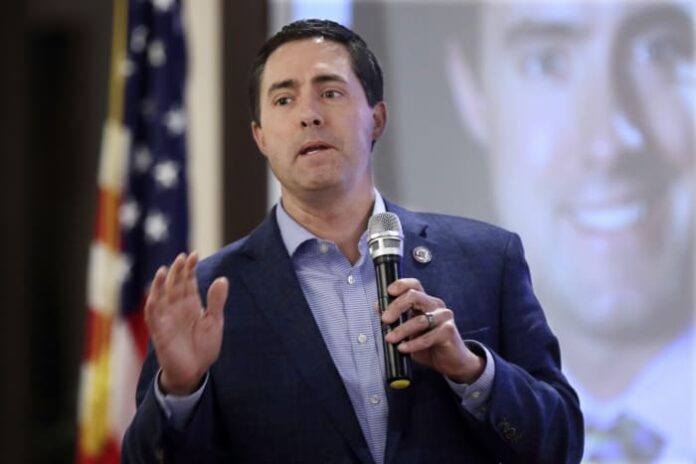 LaRose, a former Green Beret, was elected in 2018 after serving in the state Senate.

Despite Adams’ open questioning of the 2020 results, Trump’s endorsement of LaRose was expected given LaRose’s 2016 support for Trump and his role on a team that handled logistics for Trump’s 2017 inauguration. LaRose also brings the strength of incumbency to his campaign and adopted some of Trump’s talking points about voter fraud ahead of Trump’s endorsement.

In March 2020, as concerns about COVID-19 accelerated, LaRose directed all 88 Ohio county boards of elections to comply with the state health director’s order the night before the March 17 primary to close polls to prevent the spread of the coronavirus. He rescheduled in-person voting for June 2.

That timeline was later challenged in court by the Ohio Democratic Party, which advocated for casting all remaining votes by mail. Lawmakers ultimately set a new, almost exclusively mail-in primary election for April 28, 2020, over LaRose’s wishes.

This year, LaRose found himself in the primary spotlight again because of his dual roles as the state’s elections chief and as a GOP representative on the seven-member Ohio Redistricting Commission, charged with drawing new legislative maps. Because the Ohio Supreme Court repeatedly shot down proposed redistricting maps as unconstitutional gerrymanders, the state is holding a partial primary Tuesday, with state legislative races being decided later.

In the weeks after the 2020 presidential election, LaRose said, “Elections are run better and more honestly than really I think they ever have been.” Months later, he said in an interview what has proved true in state after state — that voter fraud is rare.

This February, LaRose shifted his tone on Twitter, saying the “mainstream media is trying to minimize voter fraud to suit their narrative” and “President Donald Trump is right to say that voter fraud is a serious problem.” Trump endorsed LaRose in April.

Adams, LaRose’s GOP challenger, is an Army and Navy veteran and former state lawmaker who served in the Ohio House from 2007 to 2014.

“Why am I running for secretary of state?” Adams said at a campaign event last month. “Well, we had an election two years ago, and I woke up the next morning and I said, ‘You gotta be kidding me. There’s no way that Trump lost. No way.’”

Adams also criticized LaRose for his role in postponing the March 2020 primary.