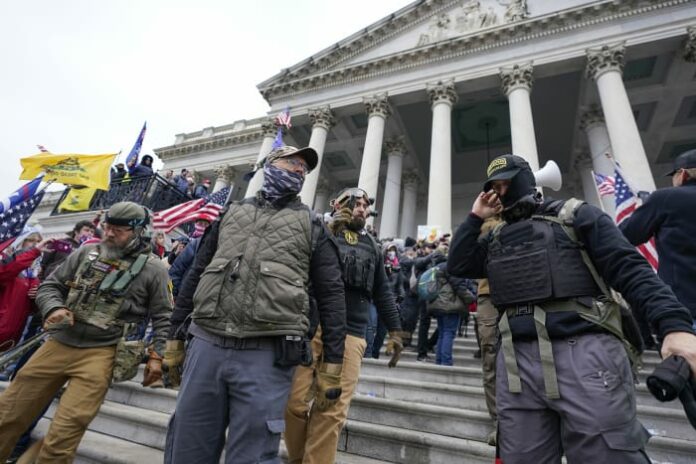 WASHINGTON – A North Carolina man pleaded guilty on Wednesday to conspiring with other members of the far-right Oath Keepers militia group to forcefully halt the peaceful transfer of power after President Joe Biden’s 2020 electoral victory.

William Todd Wilson, 44, of Newton Grove, North Carolina, is the third Oath Keepers member to plead guilty to a seditious conspiracy charge stemming from the Jan. 6, 2021, attack on the U.S. Capitol.

Oath Keepers founder Stewart Rhodes, 55, of Granbury, Texas, and eight others linked to the group have pleaded not guilty to seditious conspiracy and other charges. A trial for some of them is scheduled to start in July.

Unlike James and Ulrich, Wilson wasn’t charged in the initial January 2022 indictment for the seditious conspiracy case.

The charge is rarely employed. Before January, the last time U.S. prosecutors brought such a seditious conspiracy case was in 2010 in an alleged Michigan plot by members of the Hutaree militia to incite an uprising against the government.

Wilson was an Oath Keeper member since 2016 and a Sampson County leader of the group’s North Carolina chapter, according to a court filing. The filing describes him as a military and law enforcement veteran but doesn’t include any details of his service.

“Some members of the Oath Keepers, like Wilson, believe that the federal government has been coopted by a cabal of elites actively trying to strip American citizens of their rights,” the filing says.

Wilson brought a rifle, pistol, ammunition and other combat gear when he drove to the Washington area on Jan. 5. He left the weapons in a Virginia hotel room but was armed with a pocketknife and wearing a neck gaiter and beanie hat to mask his appearance when he and other Oath Keepers entered the Capitol on Jan. 6, prosecutors said.

Oath Keepers members dressed in paramilitary clothing stormed the Capitol in “stack” formations. Others amassed firearms on the outskirts of Washington, D.C, and were prepared to bring the weapons into the city on Jan. 6 if Rhodes or his associates believed the need arose, according to prosecutors. In the end, the group’s “quick reaction force” teams didn’t bring guns into Washington.

Before he left the Capitol, Wilson joined a mob of people trying to push open the Rotunda Doors from inside the building, according to prosecutors.

Later that afternoon, according to a court filing, Wilson joined Rhodes and others in a hotel’s private suite, where Rhodes called somebody over a speaker phone and repeatedly implored the person to tell Trump to ‘”call upon groups like the Oath Keepers to forcibly oppose the transfer of power.” The unidentified person on the phone refused to let Rhodes speak directly with Trump.

“After the call ended, Rhodes stated to the group, ‘I just want to fight,'” the filing says.

Several days after he returned home, Wilson tossed his cellphone into the Atlantic Ocean to keep its contents out of law enforcement’s hands, prosecutors said.

Wilson also pleaded guilty to a charge of obstructing an official proceeding, the joint session of Congress for certifying Biden’s victory over former President Donald Trump.

More than 780 people have been charged with federal crimes related to the Jan. 6 riot. Over 270 of them have pleaded guilty, mostly to misdemeanors. More than 160 of them have been sentenced.