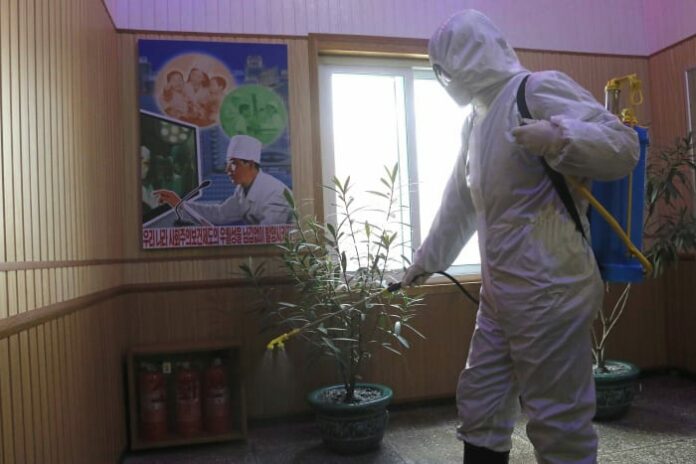 The Korean Central News Agency said tests from an unspecified number of people in the capital Pyongyang confirmed they were infected with the omicron variant. North Korea had previously claimed a perfect record in keeping out COVID-19, a claim widely doubted by outside experts.

The agency said Kim called a meeting of the ruling Korean Workers’ Party’s Politburo where members decided to raise its anti-virus measures. Kim during the meeting called for officials to stabilize transmissions and eliminate the infection source as fast as possible.

Despite the decision to elevate anti-virus steps, Kim ordered officials to push ahead with scheduled construction, agricultural development and other state projects while bolstering the country’s defense postures to avoid any security vacuum.

Kim said officials must also formulate steps to ease any public inconveniences and other negative situations that could flare as a result of the boosted anti-pandemic measures. Kim said that “the single-minded public unity is the most powerful guarantee that can win in this anti-pandemic fight,” KCNA said.

To keep the virus from entering its territory, North Korea had closed its border to nearly all trade and visitors for two years that further shocked an economy already damaged by decades of mismanagement and crippling U.S.-led sanctions over its nuclear weapons and missile program.

North Korea in January tentatively reopened railroad freight traffic between its border town of Sinuiju and China’s Dandong, but China announced a halt to the trade last month as it deals with a spread of COVID-19 in Dandong.

North Korea so far has shunned vaccines offered by the U.N.-backed COVAX distribution program, possibly because those have international monitoring requirements.