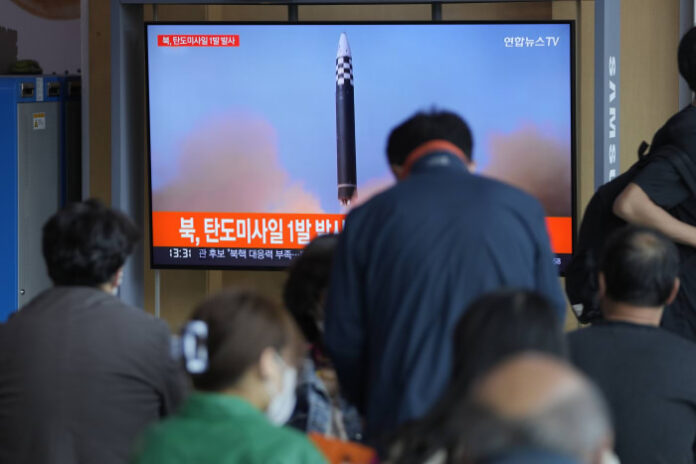 SEOUL – North Korea has launched a ballistic missile toward its eastern waters on Wednesday, South Korean and Japanese officials said, days after North Korean leader Kim Jong Un vowed to bolster his nuclear arsenal “at the fastest possible pace” and threatened to use them against rivals.

The launch, the North’s 14th round of weapons firing this year, also came six days before a new conservative South Korean president takes office for a single five-year term.

South Korea’s Joint Chiefs of Staff said in a statement that the missile was fired from the North’s capital region and flew to the waters off its eastern coast. It said the South Korean military is monitoring possible additional weapons launches by North Korea.

Japan’s government set up an emergency task force to deal with the missile launch, and noted that Prime Minister Fumio Kishida, currently in Rome for talks with Italian officials, instructed officials to do utmost for an emergency and to protect the safety of the people as well as vessels and aircraft around Japan.

Observers say North Korea’s unusually fast pace in weapons testing this year underscores its dual goal of advancing its missile programs and applying pressure on Washington over a deepening freeze in nuclear negotiations. They say Kim eventually aims to use his expanded arsenal to win an international recognition of North Korea as a nuclear state that he believes would help force the United States to relax international economic sanctions on the North.

One of the North Korean missiles tested recently was an intercontinental ballistic missile potentially capable of reaching the entirety of the American homeland. That missile’s launch broke Kim’s self-imposed 2018 moratorium on big weapons tests.

There are signs that the North is also preparing for a nuclear test at its remote northeastern testing facility. If made, the atomic bomb test explosion by North Korea would be the seventh of its kind and the first since 2017.

Last week, Kim Jong Un showcased his most powerful nuclear-capable missiles targeting both the United States and its allies during a massive military parade in capital, Pyongyang. During a speech at the parade, Kim said he would develop his arsenal at the “fastest possible pace” and warned that the North would preemptively use its nuclear weapons if its national interests are threatened.

North Korea has previously unleased harsh rhetoric threatening to attack its rivals with its nuclear weapons. But the fact that Kim made the threat himself and in a detailed manner have caused security jitters among some South Koreans. Taken together with North Korea’s recent tests of short-range nuclear-capable missiles, some experts speculate North Korea’s possibly escalatory nuclear doctrine would allow it to launch preemptive nuclear strikes on South Korea in some cases.

Wednesday’s launch came before the May 10 inauguration of South Korean President-elect Yoon Suk Yeol, who has vowed to boost Seoul’s missile capability and solidify its military alliance with Washington to better cope with increasing North Korean nuclear threats.

North Korea has a history of raising animosities with weapons tests when Seoul and Washington inaugurate new governments in an apparent bid to boost its leverage in future negotiations.

Some experts say the Biden administration’s passive handling of North Korea as it focuses on Russia’s invasion of Ukraine and an intensifying rivalry with China is allowing more room for the North to expand its military capabilities.