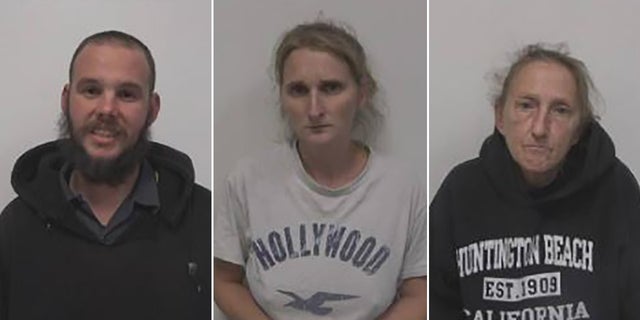 A nine-year-old North Carolina boy has been found locked in an outdoor dog kennel in freezing temperatures as his three relatives are arrested.

The boy, who was found barefooted on October 19, told the authorities he had been living in the enclosure since April because he didn’t have a room inside the family residence, according to The Dispatch.

Sarah and Jonathan Starr were charged with felony child abuse, misdemeanor child abuse, and false imprisonment. They were each given a $100,000 secured bond, Fox News reported.

Barnes was charged with felony child abuse, misdemeanor child abuse, false imprisonment, possession of a firearm by felon, and maintaining a dwelling place for controlled substances. She was being held on a $300,000 bond.

Officers received an anonymous call from someone who reported that a child had been locked in an outdoor dog kennel on Cress Road in Lexington around 7 am on October 10.

They tipster said they believed the child had been there overnight. When deputies from the Davidson County Sheriffs Office arrived at the residence they made the horrifying discovery.

The youngster was found in squalor and shivering. He had only been wearing a T-shirt, blue jeans and no shoes. Temperatures were only 28 degrees with visible frost on the ground.

Inside the kennel were two blankets, a coat, a hooded sweatshirt, a pair of kid’s shoes, two short sleeved shirts and a pair of pants, all of which were damp. Along with a battery-operated light found underneath the straw in the doghouse.

Sheriff Richie Simmons, a veteran with the Davidson County Sheriff department, said: ‘I’ve been in law enforcement for 36 years and I’ve never seen anything of this significance.’

All three are scheduled to appear in court on November 10. Davidson County Sheriff’s Office said that the case is still an ongoing and active investigation.

The child was taken to Brenner’s Children’s Hospital in Winston-Salem. He was evaluated and released that same day.

The dog kennel had been secured with a padlock. Starr told detectives that the only person who knew the lock combination was the boy’s aunt.

Davidson County Sheriff’s Office were contacted and took five other children who lived at the residence in protective custody.