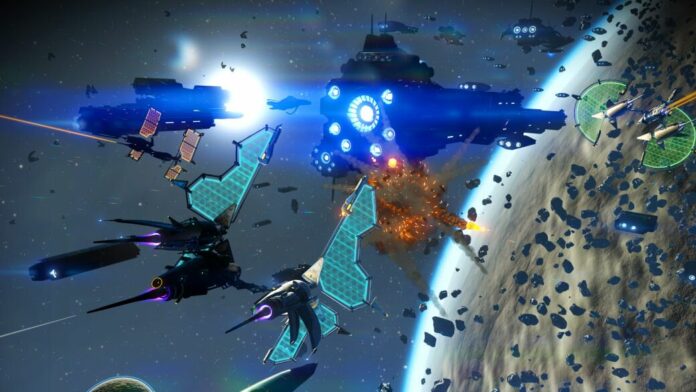 The latest free update to No Man’s Sky brings squadrons and squadmates you can upgrade, and takes a big swing at revitalizing space combat.

Bringing in a new system that will make you feel less alone and more like a roaming pack of fighters is more than welcome. From the looks of the ‘rebalances for challenge, flow, and speed’ in space combat, the help is going to be appreciated, and the additional space effects overhaul looks as dramatic as advertised.

Space piracy and smuggling are also on the menu, with the Outlaw update setting up systems for running illegal cargo, customs scans, and ways to evade the authorities. While that will make it a lot spicier to be a space trucker, since you can now be an illegal space trucker, and you can also visit Outlaw stations that aren’t protected by Sentinels. Hosting contraband marketplaces, different tech merchants, and unique mission agents, Outlaw stations look like a combination of risk and reward for daring players.

A whole host of other changes and additions have arrived with Outlaw, including the addition of shields for additional protection. With this comes a rebalance of starship weapons that will let you cause special effects like stealing shields to boost your own, knock out enemy engines, or just increase your damage when hitting the correct defense type.

To match tech changes, a new high-tech starship class is coming in the form of Solar Ships. Described as ‘versatile and efficient long-range travelers’ they don’t exactly provoke images of daring fighter combat, but seem like a great choice for wandering the galaxy while listening to some choice trippy music.

On the larger scale, pirates will actually drop into atmosphere on planets to attack settlements, bombarding the surroundings and likely humming Wagner’s Flight of the Valkyries like any good pilot. It’s also a good way to show off atmospheric combat, which is another new addition to check out.

The full details of the Outlaw update are available here.