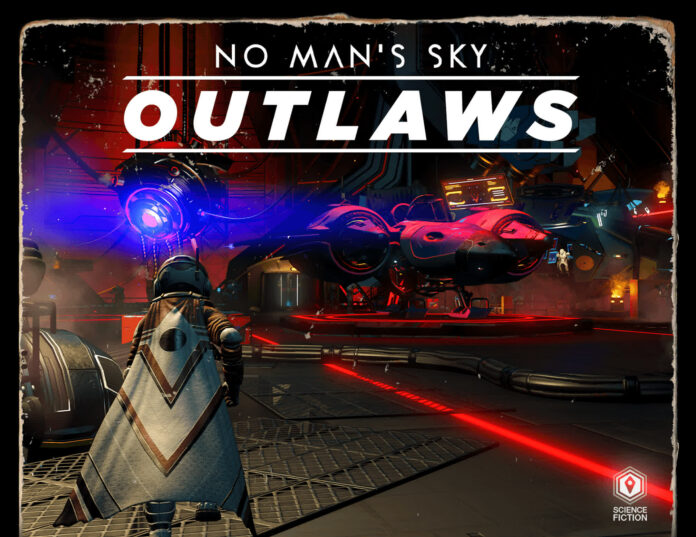 What just happened? No Man’s Sky’s latest batch of free content arrived on Wednesday. Update 3.85 is called “Outlaws” and adds a ton of new content to the game, including missions, starships, planetary raids, and more.

As the name suggests, Outlaws is all about allowing players to become pirates. While gameplay has always allowed piracy to an extent, Update 3.85 expands that aspect, making it a more unique and rewarding experience.

The galaxy is littered with outlaw systems now. These locations are pretty different from civilized space. For one, there are no sentinels, making them a perfect place for outlaws to set up bases and conduct illegal trade. Even the space stations have been taken over and are friendly to outlaws.

Hello Games added a few nuances to make playing as a pirate more rewarding and realistic. Now players can smuggle contraband items from an outlaw system and resell them for a massive profit in normal ones. Cargo ships can also hold more now to make smuggling more profitable and satisfying. But be careful. In regulated space, sentinel patrols will scan players’ ships for contraband and respond accordingly.

Fortunately, the new “forged passports” item added with the update can protect the unlawful from unwanted attention. These can also come in handy when running the all-new outlaw story missions. Hello Games didn’t indicate how much new gameplay was added, but previous story content additions contained several hours of scripted content.

Players can also hire NPCs to accompany them on freighter runs, dog fights, and the new planetary raids. The wingmen are upgradeable, allowing players to customize each of their outlaw companions. Also, when attacked by sentinels or other pirates, players can engage in dogfights within a planet’s atmosphere, and their crew will assist.

Aside from all the piratey goodness, HG added a few things that everyone can enjoy. One is a new class of starship — Solar Ships — equipped with cool transforming solar sails. Solar Ships are not just reskinned starships. They have unique characteristics and weapon systems. They can also travel further thanks to their sails hitching a ride on solar winds.

Most notably, HG has finally implemented one of the most requested features for years — a limit increase on owned starships. Previously players could only have six, which were housed in their freighters. The developers increased that limit to nine. Freighters have always had nine landing pads — six for owned ships and three for traders to conduct commerce on your vessel. Hello Games did not say whether landing pads have increased, so having more ships vs. continuing trade on your freighter might be a matter of choice.

The Outlaws update also brings numerous visual upgrades and quality of life changes. Space combat has been rebalanced, and explosions in space and on planets are more dramatic. Frigates are now visible from the planet’s surface (previously, only freighters were visible). Energy shields are revamped to vary in strength and recharge speed. They also have a visual appearance during dogfights now. Weapon effects are different too.

A completely new cloth physics engine simulates banners and flags more realistically. The developers added customizable capes as another piece of your avatar’s apparel to make this revision even more meaningful.

Finally, HG added an accessibility feature called Combat Autopilot that allows players’ ships to lock on and follow enemies in dogfights, so they only have to concentrate on operating the weapons system. Don’t worry. Players can toggle it on and off in the game settings.

As usual, there are far too many minor features and bug fixes to list, so check the Release Log to see everything Update 3.85 has to offer.