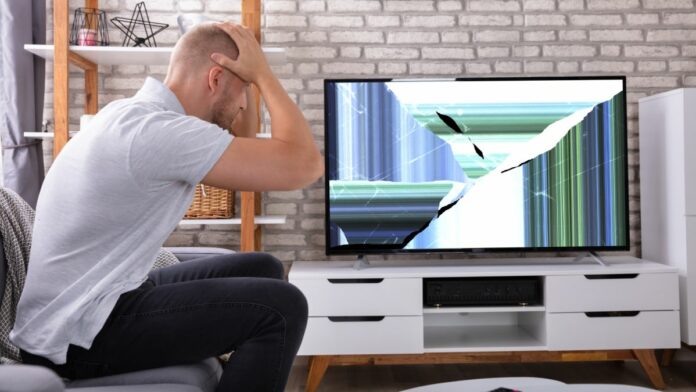 With Nintendo Switch Sports on the cusp of release, Nintendo has issued a safety warning reminding players to exercise caution when playing the energetic game, which has also inadvertently conjured memories of hilarious Wii Sports accidents.

Nintendo posted the information to its Japanese Twitter account, showcasing a selection of safety-related images for Nintendo Switch Sports. These demonstrate the optimal distance players should stand from the TV, as well as each other, in order to avoid unnecessary accidents or injuries. Another image shows players how to firmly strap the Joy-Con controller to their wrist.

A rough Google translation also tells us the content of the text (thanks, Nintendo Life), and reads as follows:

“[For parents] For your safety, please accompany your child when playing Nintendo Switch Sports. Please be careful not to hit the children playing with each other or hit the Joy-Con on the TV.

“Also, when playing Nintendo Switch Sports, attach the strap to Joy-Con and lock it, then tighten the stopper so that the strap does not come off your wrist, and squeeze it firmly.”

Will Nintendo’s timely reminder help at all?

For many, ourselves included, there’s an odd sense of nostalgia that’s created when looking at these Nintendo-issued diagrams, especially if you frequently played Wii Sports back in the day. The immensely popular Wii pack-in title was keen to warn players about the risks of waggling that Wii remote with reckless abandon.

One unintentionally humorous diagram showed a player having little care for their surroundings, knocking over a vase and another person who was unfortunate enough to be standing in close proximity.

It’s unsurprising, then, that Nintendo is keen to keep Nintendo Switch Sports accidents to an absolute minimum. The Nintendo Switch game prompts players to be a bit more active and on their feet than most, so information on how to keep yourself, others, and your belongings safe from harm is most welcome.

It’s not the first time Nintendo has offered caution for Switch games, either. Exercise-based games like Fitness Boxing and Ring Fit Adventure feature their own bespoke warning information.

Mario Party Superstars also brought back a controversial N64 minigame where players would frequently cause themselves injuries by rubbing their palms on the analog stick. The minigame in question, Tug O’ War, now features a special warning on Switch that urges players to avoid this method of play to prevent skin irritation and damage to the Joy-Con controller’s analog stick.

Here’s hoping that Nintendo Switch Sports players can keep unwanted accidents to a minimum, then. In any case, we’ll be keeping an eye on social media in the unlikely event that players begin throwing their Joy-Con controllers into their fancy new TVs. Purely for research purposes, of course.