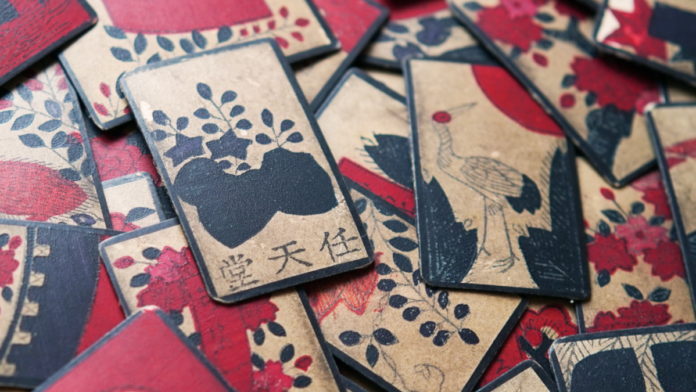 On September 23, 1889, so the story goes, Fusajiro Yamauchi founded a playing card-making company called Nintendo. From these humble origins as one of more than 30 playing card wholesalers based in the Shomendori/Takasegawa neighborhood of Kyoto, the family-owned company would become the largest playing card maker in the country. Under the leadership of Fusajiro’s great-grandson Hiroshi Yamauchi, Nintendo went after the emerging video game market, becoming the world-famous giant we know today.

In 1889, the telephone patent was two years old, Edison and Tesla’s War of the Currents was still waging, and ocean-faring steamships were ushering in the first wave of globalization. The world was shrinking fast, and Japan had, at last, emerged from its feudal Edo period with the end of the Satsuma Rebellion 12 years prior. You know, the one Tom Cruise apparently played a crucial role in…

Nintendo opened its doors in a Japan that was entering the world stage as a European-style constitutional monarchy, one with a rich culture of printmaking and record-keeping rivaling those of the most advanced Western countries.

It is puzzling, then, that we know almost nothing about the early history of Nintendo, despite being one of the world’s best-known companies. And, stranger still, what we think we know often can’t be confirmed by the documentary evidence – in fact, it’s frequently contradicted by it.

Was Nintendo really founded in 1889?

The claim that Nintendo was founded in 1889 by a 21-year-old Fusajiro Yamauchi has never really been in dispute. Nintendo itself lists the date on its website, and there is not a modern book on Nintendo that disagrees.

However, this date is likely wrong. In business directories from the Taisho and early Showa periods such as the Teikoku Shinyo-roku, the company’s founding date is consistently given as 1892, some three years later than Nintendo’s claim.

I’ve dug through hundreds of documents in Japan’s National Diet Library, and the earliest mention of the 1889 date I found was a listing in the 1936 edition of the Teikoku Shinyo-roku for Sekiryo Yamauchi, Fusajiro’s son-in-law/adopted son and the second head of Nintendo. From when Fusajiro was the head of the company, every earlier listing I’ve found lists the later date. The earliest record of Fusajiro Yamauchi I’ve seen at all is from 1895. And, unlike most other playing card manufacturers in town, he neglected to register any trademarks with the patent office until 1900.

Now, it’s not inconceivable that Sekiryo realized, perhaps through the unexpected unearthing of some old document or in a conversation with his now 68-year-old father-in-law, that Fusajiro had founded the company when he was 21 rather than 24. It seems more likely that Sekiryo simply misremembered the date when the editors of the directory reached out to him to double-check it, and then it stuck.

A critical and well-informed Nintendo fan may disagree with my claim, pointing to this photo as proof Nintendo existed in 1889

Back in 2017, a Japanese site managed by Kyoto city shared a photo saying it showed Nintendo’s offices soon after the company opened its doors. The photo spread across the internet, with Nintendo fans sharing this immensely romantic photo, depicting a beautiful traditional Japanese building that would be right at home in a Studio Ghibli film.

Except it can’t possibly be from 1889, not according to Japanese bicycle historians Masayuki Hasebe and Yuki Ootsu: “If the photo had really been taken in 1889, that bicycle would have been a wooden penny-farthing,” Ootsu told me. With a kickstand, inflatable tires, and a rear rack, a bicycle like that would come more than a decade later. Ootsu suspects the photo was actually taken between 1912 and 1930.

Nintendo under the shogunate

There’s one more confusing twist to the story of Nintendo’s origins. I’ve argued that the documentary evidence suggests Nintendo was founded in 1892, later than the popular history states, but there’s also evidence the company’s roots might go as far back as the Edo period, when the shogunate still banned playing cards – a theory first told to me by fellow card researcher Hisashi Ishikawa.

Fusajiro Yamauchi was not born a Yamauchi but a Fukui — his birth father was a man named Sosuke Fukui, and the Yamauchi family adopted him at an early age. Almost nothing is known about the Fukui family, but on what is believed to be a late Edo-period playing card print made public by Dr. Takashi Ebashi, there is a logo showing the character for luck – ‘fuku’ (福) – in a circle. The same character is also used in the surname Fukui (福井). In a different playing card print from the mid-Meiji period, we see the same logo again, and on several other cards, there are what appear to be the initial Chinese characters used to write Sosuke Fukui’s first and last names, ‘so’ (宗) and ‘fuku’ (福).

This type of logo has been common among Japanese shops and businesses ever since the Edo period. Usually, it consists of a kanji or kana character inside or underneath a specific geometric shape that you can read in a specific way. Kikkoman, the world-famous soy sauce maker, gets its name from its logo, the character “man” (萬) inside a hexagon shape known as ‘kikko’ in Japanese. Similarly, anything inside a circle is prefixed with “maru-“, so the character ‘fuku’ inside a circle is commonly read as Marufuku. As the more die-hard Nintendo fan will know, this logo, albeit in a more stylized form, is still used by Nintendo today on its hanafuda cards.

The evidence isn’t definitive, but it seems likely Fusajiro’s birth father made these two early card prints, and that the ‘fuku’ in the Marufuku logo Nintendo still uses today comes from the surname Fukui.

One reason it’s hard to study Nintendo’s history is because of the card game that it was built on: hanafuda. While Nintendo is a notable playing card manufacturer, card historians in Japan have been largely focused on more respectable card games such as Hyakunin Isshu Karuta and Iroha Karuta, where Nintendo has always been a bit player.

You may wonder what’s wrong with hanafuda. The cards are beautiful, dainty objects, each illustrated with a scene depicting birds and flowers in what appears to be a quintessentially refined Japanese image. While this is all true, the cards have had an image problem for as long as Nintendo has existed because of the hanafuda’s strong association with illegal gambling.

Illegal and semi-legal gambling such as pachinko is, in turn, strongly associated with Japan’s organized crime, the yakuza. The word ‘yakuza’ itself stems from a poor hand in hanafuda, 8-9-3 (though, strictly speaking, that’s a hand from a related card game called oicho kabu). While Japan is moving towards introducing a casino monopoly, the preparatory committee went on record to say that under no circumstances will hanafuda be played at any of the three casinos built.

This potted history goes some way to explaining why Nintendo hasn’t been eager to embrace its past. Though, the plan to open a Nintendo museum south of Kyoto in 2024 suggests that it may be changing. And, with more of the many books and documents kept by Japan’s National Diet Library getting digitized every year, there are likely more discoveries waiting around the corner.

Marcus Richert is a playing card researcher and an active member of the International Playing Card Society. He is currently Kickstarting a deck of handmade hanafuda cards together with Oishi Tengudo, the world’s oldest still active playing card maker and perhaps Nintendo’s oldest rival.