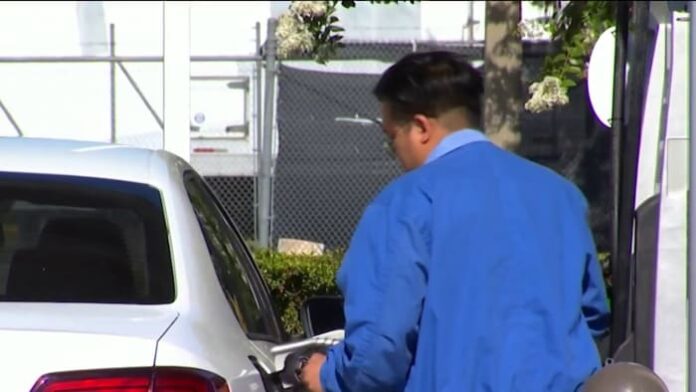 ORLANDO, Fla. – The average price for a gallon of regular gasoline in the U.S. reached $4.404 Wednesday, a new all-time record based on figures dating back to 1993, according to AAA and the U.S. Energy Information Administration.

That’s about 3 cents higher than the last national record, set just a day earlier at $4.374.

Unlike in California, where AAA reported an average regular gas price of $5.848 Wednesday, Florida isn’t taking it so hard on the nose, at least for the time being. The average price for a gallon of regular in the Sunshine State was $4.321 in Wednesday’s report, staying below the state record of $4.378 set in March.

“The Florida average price is not at a new high…. (but) we could still inch a little bit higher,” AAA Spokesman Mark Jenkins said. “I think that drivers should expect more of the same. Just big fluctuations of prices at the pump.”

Even still, Florida’s prices came in at around $4.20 on Sunday, marking a 12-cent rise in the three days from then to now. If that upward trend continues for more than another 5 cents, it would mean another record for Florida.

While Jenkins said they are not anticipating gas prices to reach $5 a gallon, the state is at the mercy of global fuel shifts.

“The EIA is anticipating that U.S. oil production will increase by the end of this year. If that does happen, then that should hopefully be that light at the end of the tunnel that we could hopefully get some relief maybe in 2023, but that’s not necessarily going to provide a lot of relief for us right now,” Jenkins said.

Jenkins said with more and more people on the road, the expectation for increased demand is driving prices higher.

“Us middle class people just can’t afford it anymore,” resident Sandy Wittenberg said. “Everything is going up and yes it is all affecting us and that means there’s less on your table.  There’s less for us that we can do and (less) places (to go) and something’s got to give.”

Wittenberg also added it means people might not be “hitting the road” as often, which would affect industry, but resident Ronnie Battle argued people have no choice but to deal with the changes.

“You have to adjust. Nothing else you can do. Gotta go to work,” Battle said.

A gas tax break is on the horizon for Floridians, but it remains months away.

Gov. Ron DeSantis committed $200 million in federal funding to alleviate Florida’s 25-cent gas tax at a bill-signing event Friday, but only throughout the month of October. Floridians will be able to purchase children’s books without paying sales tax starting this weekend, but they will wait more than four months for similar relief at the pump.