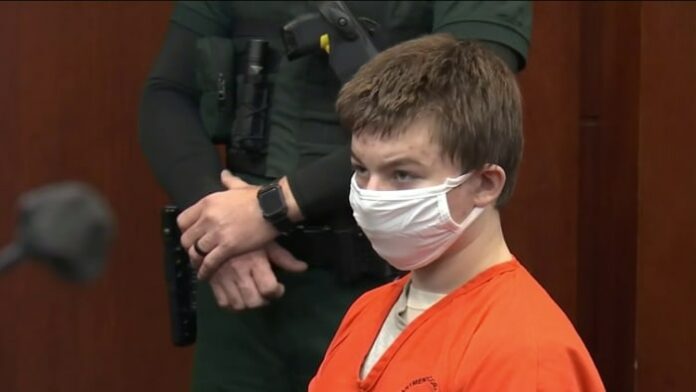 ST. AUGUSTINE, Fla. – The 15-year-old charged with the brutal stabbing death of his schoolmate, 13-year-old Tristyn Bailey, will be back in a St. Johns County courtroom Thursday, ahead of his scheduled November murder trial. He has pleaded not guilty.

The court appearance comes as Bailey’s family marks one year without her. She was found dead May 9, 2021 — on Mother’s Day.

She had been stabbed 114 times.

At Fucci’s court appearance in early February, Bailey’s family and friends were inside the courtroom gallery wearing aqua, which was her favorite color.

Fucci was arrested in the early morning hours, the day after deputies found Bailey’s body less than a half-mile from Fucci’s home in the Durbin Crossing community, the neighborhood where Bailey also lived. Investigators said his DNA was on Bailey’s body.

Fucci had a private attorney very briefly after his arrest but then he was declared indigent, meaning he can’t afford to pay for his own lawyer so the court appointed a public defender, meaning taxpayers will pay to defend him.

At his hearing in October, the public defender appointed to represent Fucci said he and the prosecutor both have a death penalty trial in March, meaning most depositions in the Fucci case won’t be scheduled until after that. His attorney has not asked for a mental competency evaluation.

Fucci’s behavior during court appearances has varied. A tattoo of a cross was visible on his middle finger at his last hearing.

In October’s pretrial hearing, he seemed alert and didn’t say much. Members of Bailey’s family sat in the audience then too.

Back in September, Fucci looked perplexed and talked about demons during a virtual pretrial hearing.

MORE: Confused-looking Aiden Fucci: ‘Demons are going to take my soul away’

According to court records, Fucci’s girlfriend told an investigator he would hear voices that would tell him to kill people. Investigators also said Fucci had a notebook that contained violent and Satanic drawings.

She said if this case goes to trial in November because a grand jury indicted him for first-degree murder, he will be treated as an adult but he is NOT eligible for the death penalty.

“It doesn’t change his trial or his potential sentence. However, because he is a juvenile, he will come up for review of his sentence once he’s been sentenced as an adult,” explained Middleton, who is not connected with the case.

So if convicted, in 25 years, Fucci could ask a judge for a lighter sentence. We’ve also seen in the past where high-profile cases have been postponed or moved to another area.

TIMELINE: The investigation into Tristyn Bailey’s disappearance and death

The case against Fucci’s mother, Crystal Smith, on charges of tampering with evidence is also expected to be heard for pretial Thursday. Investigators said she washed blood off her son’s blue jeans while he was being questioned.

The state and defense are asking to keep her case lined up with Fucci’s case for now because of overlapping discovery and depositions for witnesses.

Fucci is in custody at the Duval County jail while he awaits trial because St. Johns County does not have a juvenile wing in its jail.