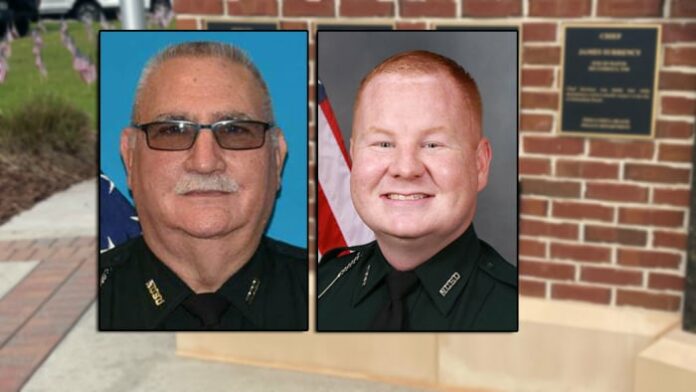 CALLAHAN, Fla. – The Nassau County Sheriff’s Office is holding its annual law enforcement memorial ceremony Wednesday to honor those who gave their lives serving the community. This year, the department is adding two names to its memorial wall.

They are Deputy Joshua Moyers, who was shot and killed during a traffic stop, and Deputy Jack Gwynes, who died after battling COVID-19 while working as a bailiff.

“When you see it visually, you can really say, ‘Wow, it’s a lot of people,” Leeper said.

Leeper said the last several years have been especially emotional. Since he was sworn in as Nassau County sheriff in 2013, three of his deputies have died in the line of duty.

It started with the untimely death of Deputy Eric Oliver, who was killed after being hit by a car during a foot chase in 2016. The man who ran from Oliver was sentenced last October to 12 years in prison for aggravated manslaughter.

And last year, there were the deaths of Gwynes and Moyers. For Leeper, Moyers’ death is an especially heartbreaking reminder of the risk these law enforcement officers face.

“Deputy Moyers, he attended this ceremony before in the past,” Leeper said. “You never expect your name to go up on that wall, but there’s always that possibility in the jobs we do.”

As the department prepares to unveil the new names at Wednesday’s ceremony, Leeper pays tribute in his own way. He wears a wristband with all three deputies’ names, ID numbers, and their end of watch dates.

“I pray to God that no other names go on that wall,” Leeper said.

Leeper said while his department still struggles, particularly with Moyers’ death, they’re pushing on. They aim to make him proud every day.

“We have a job to do. We’re going to continue doing that because that’s what our community wants us to do,” Leeper said. “And that’s what Josh would want us to do.”

Honoring those who gave all, and never forgetting their sacrifice. The sheriff says loved ones of all three deputies, plus other surviving families, will attend the ceremony at 10 a.m.