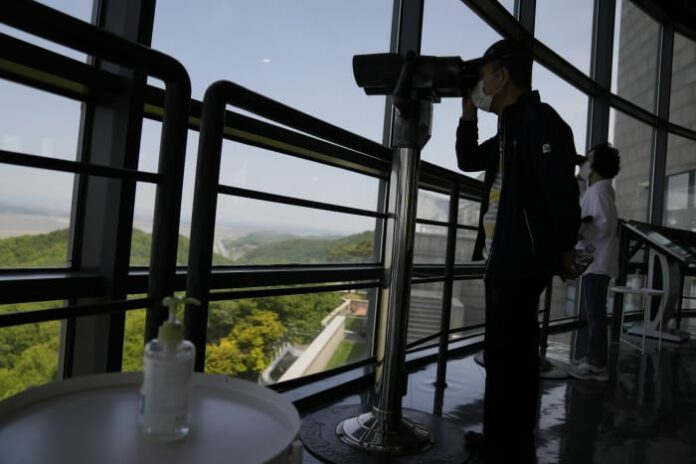 SEOUL – North Korea said Friday that six people died and hundreds of thousands of others fell ill amid an explosive spread of fever across the nation, a day after it acknowledged a COVID-19 outbreak in a largely unvaccinated population for the first time since the pandemic began.

The true scale of the coronavirus outbreak in North Korea is still unclear, as North Korea — which lacks COVID-19 diagnostic kits and other medical equipment — said it hasn’t found why the fever has happened. But some experts say the outbreak can cause major consequences because North Korea’s health care infrastructure remains broken and many of the North’s unvaccinated population are malnourished.

The North’s official Korean Central News Agency said Friday that more than 350,000 people have been treated for fever that “explosively” spread nationwide since late April and that 162,200 of them were recovered. It said that 18,000 people were newly found with fever symptoms on Thursday alone.

It wasn’t immediately clear how many of the cases were COVID-19 as KCNA said the cause of the fever couldn’t be identified.

KCNA said one of the six people who died was confirmed to have been infected with the omicron variant. Currently, it said that 187,800 people in North Korea are being isolated for treatment.

North Korea imposed a nationwide lockdown on Thursday to control its first acknowledged COVID-19 outbreak after maintaining a widely doubted claim for more than two years that it completely fended off the virus that has spread to nearly every place in the world.

State media said tests of virus samples collected Sunday from an unspecified number of people with fevers in the capital, Pyongyang, confirmed they were infected with the omicron variant. The reports did not specify the number of cases.

Experts say a failure to slow coronavirus infections could have serious consequences because the country has a poor health care system and its 26 million people are believed to be mostly unvaccinated.

He said the spread of the fever has been centered around capital Pyongyang and nearby areas and underscored the importance of isolating all work, production and residential units from one another while providing residents with every convenience in curbing the spread of the “malicious virus.”

“It is the most important challenge and supreme tasks facing our party to reverse the immediate public health crisis situation at an early date, restore the stability of epidemic prevention and protect the health and wellbeing of our people,” KCNA quoted Kim as saying.

Describing its anti-coronavirus campaign as a matter of “national existence,” North Korea had severely restricted cross-border traffic and trade for the past two years and is even believed to have ordered troops to shoot on sight any trespassers who cross its borders.

The border closures further battered an economy already damaged by decades of mismanagement and crippling U.S.-led sanctions over its nuclear weapons and missile program, pushing Kim to perhaps the toughest moment of his rule since he took power in 2011.

North Korea in January tentatively reopened railroad freight traffic between its border town of Sinuiju and China’s Dandong, but China announced a halt to the trade last month as it deals with a spread of COVID-19 in its border areas.

It was the North’s 16th round of missile launches this year as it pushes a brinkmanship aimed at forcing the United States to accept North Korea as a nuclear power and negotiate sanctions relief and other concessions from a position of strength.