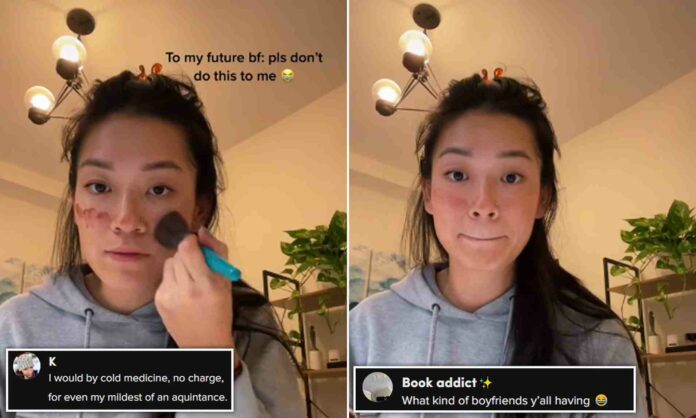 A woman has claimed an ex-boyfriend once charged her for medicine she asked him to get for her because she was sick.

Jackie Li, a TikTok creator from Hawaii, said the ex-partner and her had been dating four years by the time he sent her a Venmo request to repay him $7 after he got Dayquil for her.

In a video that has since gone viral, Jackie explained she was shocked to wake up to the request, and added she now prefers relationships where her partners don’t obsess over every dime they spend for each other.

People were shocked by her tale, with many saying they’d get medicine without charge for their ‘mildest of acquaintances,’ let alone their significant other.

Meanwhile, another woman revealed how she’s had a much happier ending with a former partner and has become her ex-partner’s new girlfriend’s best friend.

‘One time I was feeling really sick and I asked my boyfriend at the time if he could buy me some cold medicine on his way home,’ Jackie said in the video.

‘So after he finished work, he dropped by CVS and picked up some DayQuil for me. Really kind of him, really appreciate that.’

Jackie said she went to sleep shortly after her boyfriend got home and she took the medicine.

‘I think I prefer a relationship where it’s like, ‘Hey, I’ll get this, you get that the next time,’ and we’re not keeping track of our expenses, dollar by dollar,’ she explained. ‘I should’ve known, but you know, we’re not together anymore so it wasn’t meant to be.’

People had a lot of thoughts about the story, with some shocked that anyone would charge their significant other for medicine.

‘Watching couples nickle and fine each other on venmo is so funny like I can tell who is going to stick and who isnt on charges ALONE,’ another wrote.

“‘get your bag’ and also pack your bags. he’d be GONE,’ another said.

‘The way my jaw DROPPED,’ one wrote.

‘4 years for MEDICINE,’ one said, while another commented ‘What kind of boyfriends y’all having.

‘I would do that for a coworker without asking for reimbursement. Like literally when someone calls out of work I ask if they need meds and either stop by with smth or DoorDash meds,’ another commented.

‘I would buy cold medicine, no charge, for even my mildest of an acquaintance,’ one said.

‘Yea I would have sent him his 7 and broke up with him. Like hah,’ one wrote.