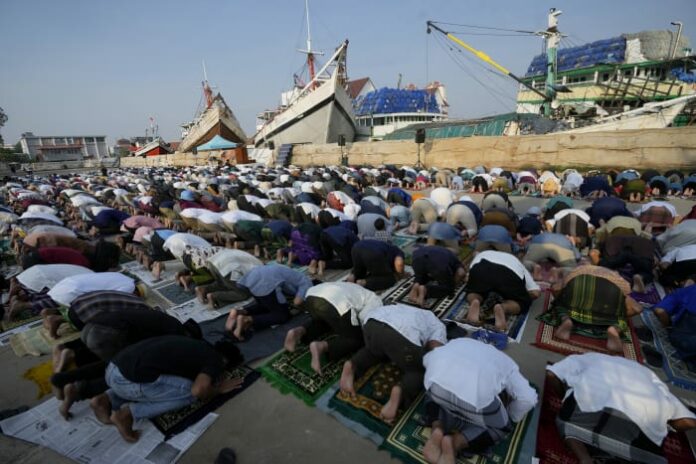 CAIRO – For the Islamic holiday of Eid al-Fitr, the smell of freshly baked orange biscuits and powdered sugar-dusted cookies typically fills the air in Mona Abubakr’s home. But due to higher prices, the Egyptian housewife this year made smaller quantities of the sweet treats, some of which she gives as gifts to relatives and neighbors.

The mother of three has also tweaked another tradition this Eid, which began Monday in Egypt and many Muslim-majority countries and marks the end of the Islamic holy month of Ramadan. She bought fewer outfits for her sons to wear during the three-day feast.

“I told them we have to compromise on some things in order to be able to afford other things,” she said.

This year, Muslims around the world are observing Eid al-Fitr — typically marked with communal prayers, celebratory gatherings around festive meals and new clothes — in the shadow of a surge in global food prices exacerbated by the war in Ukraine. Against that backdrop, many are still determined to enjoy the Eid amid easing of coronavirus restrictions in their countries while, for others, the festivities are dampened by conflict and economic hardship.

At the largest mosque in Southeast Asia, tens of thousands of Muslims attended prayers Monday morning. The Istiqlal Grand Mosque in Indonesia’s capital Jakarta was shuttered when Islam’s holiest period coincided with the start of the coronavirus pandemic in 2020 and was closed to communal prayers last year.

“Words can’t describe how happy I am today after two years we were separated by pandemic. Today we can do Eid prayer together again,” said Epi Tanjung after he and his wife worshipped at another Jakarta mosque. “Hopefully all of this will make us more faithful.”

The war in Ukraine and sanctions on Russia have disrupted supplies of grain and fertilizer, driving up food prices at a time when inflation was already raging. A number of Muslim-majority countries are heavily reliant on Russia and Ukraine for much of their wheat imports, for instance.

Even before the Russian invasion, an unexpectedly strong global recovery from the 2020 coronavirus recession had created supply chain bottlenecks, causing shipping delays and pushing prices of food and other commodities higher.

In some countries, the fallout from the war in Ukraine is only adding to the woes of those already suffering from turmoil, displacement or poverty.

In Syria’s rebel-held northwestern province of Idlib, Ramadan this year was more difficult than Ramadans past. Abed Yassin said he, his wife and three children now receive half the amounts of products — including chickpeas, lentils, rice and cooking oil — which last year they used to get from an aid group. It has made life more difficult.

Syria’s economy has been hammered by war, Western sanctions, corruption and an economic meltdown in neighboring Lebanon where Syrians have billions of dollars stuck in Lebanese banks.

In the Gaza Strip, though streets and markets are bustling, many say they cannot afford much.

“The situation is difficult,” said Um Musab, a mother of five, as she toured a traditional market in Gaza City. “Employees barely make a living but the rest of the people are crushed.”

Mahmoud al-Madhoun, who bought some date paste, flour and oil to make Eid cookies, said financial conditions were going from bad to worse. “However, we are determined to rejoice,” he added.

The Palestinian enclave, which relies heavily on imports, was already vulnerable before the Ukraine war as it had been under a tight Israeli-Egyptian blockade meant to isolate Hamas, its militant rulers.

Afghans are celebrating the first Eid since the Taliban takeover amid grim security and economic conditions. Many were cautious but poured into Kabul’s largest mosques for prayers on Sunday, when the holiday started there, amid tight security.

Frequent explosions marred the period leading to Eid. These included fatal bombings, most claimed by the Islamic State affiliate known as IS in Khorasan Province, targeting ethnic Hazaras who are mostly Shiites, leaving many of them debating whether it was safe to attend Eid prayers at mosques.

“We want to show our resistance, that they cannot push us away,” said community leader Dr. Bakr Saeed before Eid. “We will go forward.”

Violence wasn’t the only cause for worry. Since the Taliban takeover in August, Afghanistan’s economy has been in a freefall with food prices and inflation soaring.

At a charity food distribution center in Kabul on Saturday, Din Mohammad, a father of 10, said he expected this Eid to be his worst.

“With poverty, no one can celebrate Eid like in the past,” he said. “I wish we had jobs and work so we could buy something for ourselves, not have to wait for people to give us food.”

Muslims follow a lunar calendar, and methodologies, including moon sighting, can lead to different countries — or Muslim communities — declaring the start of Eid on different days.

In Iraq, fewer shoppers than usual appeared to have visited the capital’s clothing markets this year. Security issues also plague celebrations, with security forces going on high alert from Sunday to Thursday to avert possible attacks after a suicide bombing in Baghdad last year ahead of another major Islamic holiday killed dozens.

In India, the country’s Muslim minority is reeling from vilification by hardline Hindu nationalists who have long espoused anti-Muslim stances, with some inciting against Muslims. Tensions boiled over into violence at Ramadan, including stone-throwing between Hindu and Muslim groups.

Muslim preachers cautioned the faithful to remain vigilant during Eid.

Indian Muslims “are proactively preparing themselves to deal with the worst,” said Ovais Sultan Khan, a rights activist. “Nothing is as it used to be for Muslims in India, including the Eid.”

Millions of Indonesians have crammed into trains, ferries and buses ahead of Eid as they poured out of major cities to celebrate with their families in villages in the world’s most populous Muslim-majority country. The return of the tradition of homecoming caused great excitement after two years of subdued festivities due to pandemic restrictions.

“The longing for (the) Eid celebration in a normal way has finally been relieved today although the pandemic has not yet ended,” said Hadiyul Umam, a resident of Jakarta.

Many in the capital flocked to shopping centers to buy clothes, shoes and sweets before the holiday despite pandemic warnings and food price surges.

Muslims in Malaysia were also in a celebratory mood after their country’s borders fully reopened and COVID-19 measures were further loosened. Ramadan bazaars and shopping malls have been filled with shoppers ahead of Eid and many travelled to their hometowns.

“It’s a blessing that we can now go back to celebrate,” said sales manager Fairuz Mohamad Talib, who works in Kuala Lumpur. His family will celebrate at his wife’s village after two years of being apart due to earlier travel curbs.

There, he said, they will visit neighbors after the Eid prayers, chanting praises of Prophet Muhammad, and sharing food at each stop.

“It’s not about feasting but about getting together,” he said ahead of the holiday. With COVID-19 still on his mind, the family will take precautions such as wearing masks during visits. “There will be no handshakes, just fist bumps.”